Wednesday, August 21, we docked in Eskifjordur, Iceland.  It was time for an easy day, so I had a leisurely breakfast in the Lido and went straight to the gym.  Once I had my body in shape, I tackled my paperwork.

We had our group dinner in the Dining Room that night, so we all met in the Hudson Room at 6:25 pm.  Almost everyone in the group came.  We had a great time, and a lot of laughs.  When you get up in years, ordinary life often turns to comedy.  I was alone at a table with the one couple, where the husband is a little deaf.  When we got to the inevitable age comparisons, they couldn’t believe I was as old as I am.  I was happy to say I was in perfect health except for the stiffness.  Well, he heard “syphilis.”  They next thing you knew, we three were falling off our chairs laughing.  I told them I did not want to see a comment on the comment card about me being a fine host, but could they not find one who didn’t have an STD.  More hilarity.  I had to go explain ourselves to the other two tables and now they are all threatening me with that comment on the comment card.  I put the story in my log to DV, telling them not to believe it for a minute.

The show was a Hungarian violinist playing Latin Jazz.  His name was Akos Laki and he was very good.

I got up early on the 22nd and did a bit of necessary work because I wanted to spend the day on shore.  That done, I went to breakfast, met David and Debbie, and we disembarked.  The town name, spelled Akureyri, is pronounced “Accu-ray-dy”. Go figger.  The ship’s tour that interested us was $200 per person.  After much haggling, at which Dave is a master, we had it in a taxi for 175 dollars and 175 Euros.  Since the Euro is only $1.10 these days, it was a deal.  It was also every cent we had on us, and a good bargain.  Paul, our taxi driver didn’t say much for the first hour or so, but he finally opened up and we learned a bit from him.  It was a nice drive.  It’s such a clean country, air and all.  Where it’s green, it’s very green, and where it’s not, it’s all lava rock.  There’s a lot of that.  There aren’t many cars on the roads, and the roads are in perfect condition.  The net effect is a very relaxing drive.  I made friends with a sheep.

Much of the terrain reminded me of my childhood in St. Calixte, north of Montreal, where the fields sometimes had large rock out-croppings.  I am thinking St. Calixte looked exactly like this millions of years ago and Iceland will look like St. Calixte some millions of years in the future.  The same is true of a lot of places.

We stopped at the geo-thermal baths at Mivatn, where you could bathe in the pools for about $25.  I am sure they were nice and warm but getting undressed in 10 degrees C is not my idea of a good time.  We had a muffin, instead.  From Mivatn for many miles, the fields were all lava, and there was steam still rising here and there.  There’s not a blade of grass.  The volcanoes are still active around here.  Next we visited the waterfall at Godafoss, which was very pretty, but not spectacular.  By the time we got back we liked Paul so well that I tried to get his coordinates for next year, but he wouldn’t give them to me.  I think he might fear the wrath of the taxi company for taking the ride under market.

When I got back to the ship, I tweaked a letter to my people, so no one would forget the kitchen tour and that they had signed up for two more dinners.  I delivered that before dinner.  Then I went to the dining room and ate with Janice and Peter from Australia, a nice Dutch couple and a Canadian couple.  The table was a long thin one, so I only really talked with Janice and Peter, until the Dutch couple left and we had another half hour with the Canadians.

On August 23, we were docked in Isafjordur, Iceland. I did some job-related work, had a leisurely breakfast in the Lido and went straight to the gym.  Once I had my body in shape, and my emails caught up, I went out.  The tourist information office wasn’t much but it provided a good map, with suggested walks.  I chose old town, as I am always interested in architecture.

A couple of teenaged girls were selling cookies and squares, on the first corner and I bought two jam filled butter cookies that just melted in my mouth.  I like encouraging free enterprise in the young, and the cookies were delicious.  The houses were built mostly in the late nineteenth century and are of corrugated tin, doubtless very well insulated and painted pretty colors.  They ranged from small and simple to large and Victorian.  The newer construction is all cement and steel and not nearly as interesting. 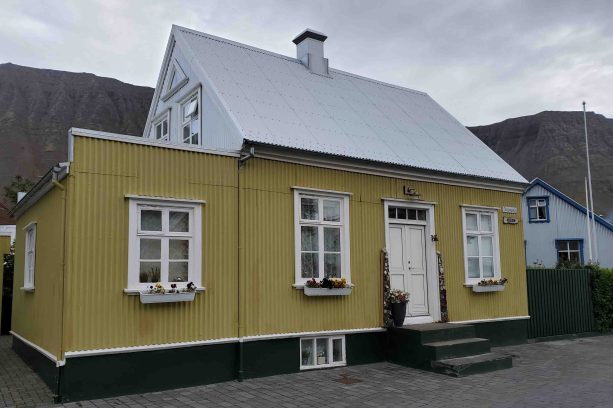 I landed the same long table again, and Peter and Janice, too, along with a Dutch couple and a Canadian couple.  The bonus was Dorothy, from the first night.  We went to the show together.  It was a pianist named Naomi Edemariam, and she was playing familiar pieces from famous operas, like Toreador from La Bohème and The William Tell Overture.  (“To the dump, to the dump, to the dump, dump dump”).  Hi Ho Silver, away.

On Saturday, August 24, we had our private Kitchen Tour, with Presty, so I went to the Dining Room, instead of the desk.  Sixteen people came on the Kitchen Tour and were glad they did.  Presty gave us the most in-depth kitchen tour any of us had ever had.  Chef came out and spoke to us, we saw pasta making, and plating for a special lunch, which was to start in a half-hour in the Dining room, dessert assembly, the works.  They don’t buy any bread, pasta or pastries.  They make all that on board.  We were all delighted with the tour.  When we ended up in The Pinnacle, Presty told the group he had done it because he knew me so well after a long history of world cruises together on the Amsterdam.

I picked up my computer and went to the desk.  It was freezing there because “On Deck for a Cause” was just coming back and the doors were in the permanently open position.  I put in an hour there and then went to the gym, grabbed a rice pudding in the Lido, and logged and blogged the afternoon away.  It was 6:35 pm before I even looked at my watch.  I changed and went to the dining room.  This time I landed an all Dutch table.  They were very nice but it’s a bit of work for all of us.  The show was the Knights again.