I held a lucky draw in the Crow’s Nest for my people and bid them a fond farewell.  Then I joined my old friends, Jack and Sylvia, for a last dinner together.  They chose The Lido Café, so there we ate, and then we went to the Ocean Bar, where they could dance, but the band wasn’t playing anything good, so we just chatted, comfortably, like the old shoes we are.  They left very early the next morning and are home safely, in Toronto, having paid too much for me, for their airport taxi in Amsterdam.  Since there’s only one of me, the ship’s transfer is an attractive option.  The taxi cost 70 euros.

On Sunday, a whole new cruise was starting, to Iceland and Greenland.  I had met with everyone I needed to, yesterday, so I was free early in the day.  I had mysteriously got a significant cabin upgrade to a Vista Suite, so the first order of business was moving.  Housekeeping brought a bell cart and all I had to do was put everything that wasn’t hanging into my suitcase.  I bagged it all by drawer or shelf and it was done in a jiffy.

I couldn’t do any more until everyone had boarded.  There are always a few “guarantees” and an upgrade or two. So, I went out in Amsterdam to see the Rembrandts I had missed on the way in.  There were a couple of helpful Dutchmen in the information booth and they looked up the location of the convention center, RAI, to find me transportation.  They determined it was a 35-euro taxi ride away, and I sure wasn’t paying 70 euros to see a bunch or reproductions.  The good news was that it was a straight shot on the Metro.  I could walk to Centraal Station and catch that.

That’s what I did.  It was a 10 to 15-minute walk, and starting to sprinkle, just as I got there.  I had met a lot of people on the way with Rotterdam Luggage tags.  Our Dutch passengers just take the train from home and wheel their luggage on board.  Once in Centraal station, I found the M52 line without much difficulty and took the escalator down.  Then I met the ticket booth.  It certainly could have been friendlier.  I touched English and still could not figure out what it wanted me to do next.  It was rejecting my credit card in both of its slots.  There was no one around but eventually a girl of 18-22 years of age came up and used the machine beside me, in Dutch, of course.  But all the Dutch speak English, so I started whimpering and asked for help.  She kept her head held high in the air and ignored me completely.  I called out “Thanks for your help” to her retreating back.  I’m glad I’ll be dead by the time that generation rules the world.

A couple of minutes later a little kid showed up.  He wasn’t more than six, but he spoke good English and knew how the machines worked.  Luckily, my credit card did, too, and I was soon in possession of a round trip for 9 euros.  Maybe there’s hope for his generation.

The subway was clean and efficient, and I was soon where I wanted to be.  The exhibition is wonderful.  Every known work of Rembrandt’s is there, reproduced in the size he originally painted, or etched, them.  There were about 320 paintings.  Only 41 of them are in Dutch collections.  The rest are spread over 18 countries, in museums and private collections.  Some have been stolen and damaged.  But they are all here, digitally remastered to the state they were in when they left the artist’s studio.  And they were beautiful.  I met my old friends from the Frick in New York.  Those I recognized from afar, as I must have visited them about ten times.  I love the Frick. I almost lost track of time and had to hurry through the last quarter of them.

But the ship’s drill is compulsory, even for passengers from the previous sailing, so I had to get back on board, and I did.  I did the drill in the company of six Montrealers, who happened to be behind me at our muster station.  Then I went to the front desk, got my manifest updated and a more complete shore excursion description from the EXCursions department.  I made my corrections and did my mail merge.  I was out delivering a little after six, and in line for dinner before seven.

I landed a wonderful table in open seating.  There were Rolf and Marion, from Amsterdam, Sharon and Brian from Seattle and 90-year old Dorothy from Austin, formerly Houston. We all clicked and had a fabulous time.  I’m hoping to dine with these people again.

Monday, August 19 was a sea day.  I got up and went straight to the Lido for breakfast.  The NY Times Daily wasn’t in the rack, so I took “Britain Today.”  When the next guy came up, I remarked “No American paper today.”  He said, “That’s alright.  They can’t read” in unaccented English.  And that, my friends, is what the rest of the world thinks of us.  How sad can it get?

I was back in my room by 9:00am, calling all of my people.  Then I went to the desk, where three couples came, which was good.  In the afternoon, I met with Presty, the Dining Room Manager, with whom I have more than 500 days of history.  We tee’d up a private Kitchen Tour and a group dinner for 10 in the Dining Room on August 21.  I met with Shore Excursions again and tweaked the cocktail party speech. By 4:00pm, I was up in the Crow’s Nest waiting.

Everybody came but one person, who wasn’t well.  More than that 14 people signed up for the Kitchen Tour and all 21 who came signed up for dinner at 6:30pm on the 21st.  There are three people with the same last name on the manifest.  They are next door neighbors in Neptune suites, and they had never met before this party.  I introduced the single lady to the male half of the couple, as his mother.  They got talking and by the time our gal was done, she was his younger sister.  Too much fun.

Between the cocktail party and dinner, I drafted a newsletter with the Dinner and Kitchen Tour in it.  I wanted to run them by Presty at dinner.  The dining room was a zoo that night and I ended up meeting with him about four times, before, during and after dinner.  We worked it out, though, and I left with clarifications for the letter I would be delivering in the morning.

I was late for the show, but I did catch the tail end of it, and it was pretty good.  It was three male singers, who called themselves the Three Knights and sang songs written by, or from shows produced by, people who had been knighted for their efforts.  You know who they are.

On Tuesday, August 20, I got up early in Torshavn, Faroe, Islands.  I fixed the newsletter, mail-merged it and delivered it before breakfast.  I wanted to go out in this pretty town.  There was a mob in the stairways, so we waited an hour after docking and I stepped off with David and Debbie at 11:00am. 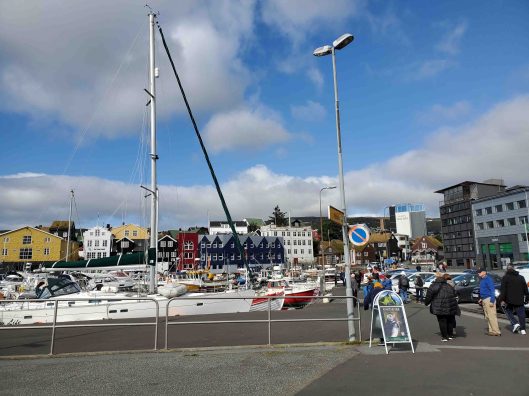 The taxis weren’t bargaining, not at all.  It was going to be at least $90 pp, to go anywhere for a couple of hours.  We might have caved, had there not been free buses all over town.  We decided to try one.  We ended up taking three of them.

They were fun.  They took us through many neighborhoods, to see how the people lived.  The air was clean and fresh.  There were sheep grazing in the suburbs and sea gulls to fight over a loaf of bread one of our fellow passengers had spirited off the ship.  Best of all, there were children using the bus to get home from school.  It’s safe here.  People still let their children ride public transportation all over the place and talk to strangers.  They spoke beautiful English, one of them had even lived in Georgia when she was younger. She was probably ten.  One of our bus drivers told us that a number of people who were born in the Faroe Islands, and went to a city to make money, decide to come back to raise their children.  The education is good, and it’s a kinder, gentler place.  I’ll bet the weather is nasty in the winter, though.  It was none too warm in August, and this was a beautiful sunny day.

I had dinner with four Aussies, Vicki, Jerry, Anne and Heather, plus Marion and Rolf again.  This was my second time eating with them.  The third will be on purpose.  I like them a lot.  They were born and live in Amsterdam, but they were in the States for a long time.  Rolf worked for IBM in Poughkeepsie, and Marion was an architect.  She had her own firm and built shopping centers all over the world, for people like IKEA.  We went to see the British comedian, Paul Adams, again, and had a few chuckles before bedtime.