On August 25, we entered Prince Christian Sound.  This is real scenic cruising.  I was at my desk from 10:00am to 11:00 am, but not much longer.  The captain came on the PA about 11:05 am to tell us we were approaching a glacier and he was going to stop and do a 360 degree turn so it could be seen from everywhere on the ship.  I figured everywhere included my balcony, so I went there, post haste.  I was just in time for the turn to begin and was rewarded with this picture.

The Internet wasn’t working too well, mind you, but I guess that was to be expected.  It doesn’t get a lot more remote than this.  I enjoyed the scenery, instead.  You can only transverse Prince Christian sound a few weeks of the year, and we are very lucky with the weather.  It’s cold, but it’s beautifully clear.  Just look at those colors.

We got commentary from Glenn-Michael over the PA, every couple of hours.  He shared some interesting research.  The Greenland ice sheet has been both growing and shrinking over the years it has been possible to measure it.  Despite everything you hear, it has changed 0.0% since we have been measuring it.  That’s reassuring.  The ice sheet is two to six miles deep and covers most of Greenland.

I had dinner with Dorothy again.  We are now meeting on purpose and taking pot luck, mostly, for the rest of the table.  We got Judy and Dave from Victoria, BC again, and Anita and Brian from the East Bay.  Judy and Dave have written a series of children’s books and distribute them wherever they go.  I googled “Fumble the Bumble” and they are for real.  Judy is getting David to make a “Greenland: Not for Sale” sign, for when we get there.  The evening’s entertainer was Canadian, too, Greg Rodman, a solo guitarist.  Dorothy cracks me up.  She’s 90, but no one wants to believe it.  She was in an assisted living place but moved out a couple of years ago, because it was full of old people.  She makes the most hilarious snide comments about the other passengers, none of which are fit for this blog, but they are spot on and they crack me up.

August 26, we tendered off Qaqortoq, Greenland.  I had breakfast in the Lido,  went to the gym and got on a tender into town around noon.  This is the biggest town we’ll see in Greenland.  It is between 3,000 and 3,500 people.  Between us and NCL’s Aida, which was also there, we more than doubled the population.

There was one souvenir shop at the pier, about four tables set up by locals, a general store and a couple of second-hand clothing stores.  There were also three bars/restaurants, and that was about it.  We are in early to this port.  It’s not tourist-spoiled yet, and the houses all have water views, even the colorful apartments.

I walked around most of the accessible parts, not climbing the really steep slopes, which often involved rather dicey stairs for an old broad.

The general store was a kick.  You could buy absolutely everything there, none of it cheap.  The food items were the most interesting.  They did have fresh and frozen fruits and veggies, meats of all kinds, mostly frozen, raw and cooked.  There was an array of frozen foods representing the cuisines of the world, Italian, French, Thai, Chinese, Indian, you name it.  They also had pork crackle, and a wide variety of local fish.  They even had a selection of wines of the world.  Kendall Jackson Zin was $33, which I guess is about twice the price it is where it comes from, close to Santa Rosa.  But, it’s there, and that’s a good thing, I think.

As luck would have it, I rode back on the tender with Judy and Dave and got this picture of her while we were waiting for it. 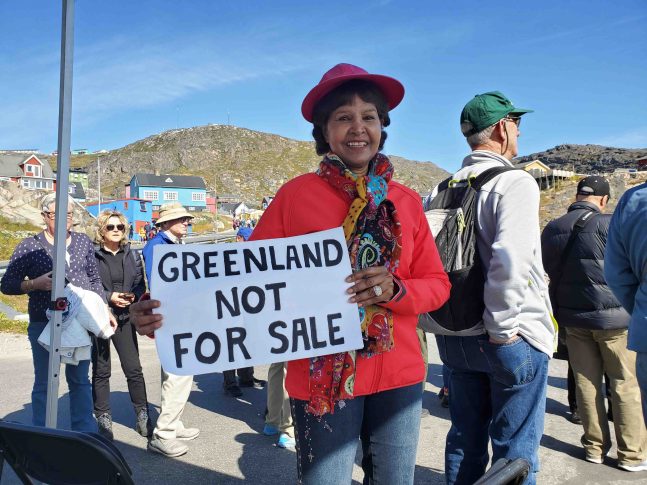 I scored a very expensive pair of reindeer hide and Arctic fox slippers, which are so cosy and comfy, I wore them to dinner and the show.  The show was good.  The singer was Welsh and her name is Maria Lyn.  Methinks I have seen her before on the Amsterdam.

On August 27, we anchored off Paamiut, Greenland.  This little place is about half the size of Qaqortoq and the weather was pretty bleak.  I had breakfast, did some work, went to the gym and picked up a tender ticket.  It was after noon.  Nearly an hour later, my tender was called and I made my way to the tender platform on deck A.  The people coming off the tender told me not to waste my time.  The whole operation takes over an hour and a half and there wasn’t much to see.  Despite this being the center of the fur trade in Greenland, there were no shops open, nothing at all to buy, and only a little old church to see.  I could easily pass on that.  I am so happy I got my slippers yesterday.