It was a nice day, for a change, so Adam, Judy and I took a big spoon and a little bit of Elvon, and buried him in the garden at 63 Chesterfield, which he had lovingly tended for many years, while the Symanskys were in Cape Cod.  I was on the road to Cornwall, for another dental appointment, by 10:30 am.  This was to pick up a splint to minimize the effects of TMJ, which I seem to have developed, another of the joys of living so long.  We fall apart by degrees.

Rosemary was waiting when I was done and she took me to Esca, Gourmet Pizza and Bar, which may be Cornwall, Ontario’s best restaurant.  I had a Philly, which was an all white pizza. I mean no tomato sauce, just béchamel, mozzarella cheese, slices of roast beef, mushrooms and caramelized onion.  There were a few leaves on it, but they were easy to take off.  It was probably the best pizza I have ever had.  I ate all but the two little slices that Rosemary ate, with her Caesar salad.

By two-thirty, I was back on the road again, bound for Ile Bizard, and Ginger Petty’s resort.  No, you can’t pay to sleep here.  You have to be Ginger’s friend, and I have been lucky enough to have been that for 46 years.  It’s a fabulous property, 35 acres on the waterfront, with a lovely old stone mansion to sleep in, and all mod-cons.  Ginger had planned an early dinner, (God, save me!), and had invited Barbara Matheson, another old friend.  I wanted to invite Monique Milette, too, and that was fine with Ginger.  It was fine with Monique, too.

Before dinner, we four widows buried another part of Elvon.  I had planned on spreading these ashes on the Lake of Two Mountains, from Ginger’s sea wall, but, as usual, she had a better idea, and she had it ready.  Behind the stone lion, to the left of the house, as you drive in, 700 feet, was a grave she had had dug for Scruffy and herself, taking advantage of a handy back hoe.  She welcomed a bit of Elvon as its first occupant.  I’m sure he likes this spot.  Monique took the best picture, so I PhotoShopped her in from another one.  You do what you do, with what you have.  She’s on the left, with me, Ginger and Barbara. 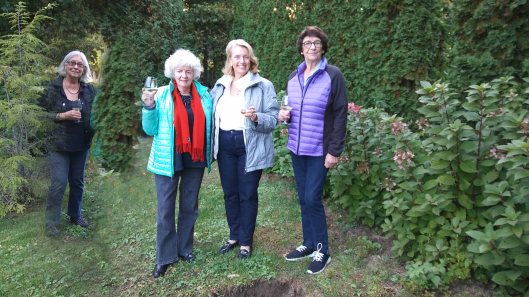 Ginger had paté and cheese appetizers, steak on the BBQ, baked potatoes, etc. We didn’t have dessert, because it was an election day, and the pastry shops were all closed.  No one needed it.  It was just lovely to all be together again.  We all fought development on Ile Bizard in the seventies, and became friends in the process.

I slept well in my waterfront view room, at Ginger’s, and had another work day on Tuesday.  Debbie Brousseau came over for a glass of wine before dinner, but couldn’t stay, so Ginger and I had a very nice Presidents’ Choice Osso Bucco, by ourselves.

Jennifer Terni went back to the states on Tuesday, to touch bases with her job, leaving a schedule that gave Andrea a partner every day, and Wednesday was mine.  The CLSC, a Canadian Government Service that provides home health care, and the equivalent of Hospice, was supposed to be in from 9:30 am to noon, giving me time to drive in, without fighting traffic.  Marc Edery, a good neighbor, was covering the hour-and-a-half from when the night person left, until Jamina, the CLSC person, arrived.

I was in the Patisserie de l’Ile Bizard, by 10:00 am, and on the road at 10:15, as scheduled.  On the Decarie Expressway, when I thought I was 15 minutes out, the phone rang.  It was Marc.  The CLSC person had not shown up to bathe Paul, and do any other necessaria.  Marc had called them, and they hadn’t called back.  Would I be on schedule, he hoped?  I was happy to report that it looked like I’d be ten minutes early.  Well, I wasn’t.  The City of Montreal had decided to tear up another street, and it was Sherbrooke, right in my path.  It only cost me about twenty minutes, though.  So I was there at ten past eleven, parked for 12 hours in the Grand Seminary across the street, for $14.

There was a nurse there, and she was on the phone, trying to organize a procedure for Paul.  She could only find one vein, and you have to have two good ones for assisted suicide.  I can understand why they don’t want anything to go wrong, and so could Paul.  Fortunately, he had gained quite a bit of strength, on his diet of treats, and felt he could go to the hospital, between then and Saturday.  They’ll come for him in wheelchair transport, with strong men to lift him, chair and all, down the six stairs to get out of the apartment building.  He went for it.  The man is very strong mentally.  I am awed and humbled. Right after that he ate two-thirds of a mille feuille and a piece of fresh fruit custard tarte.  He actually helped himself to the second piece, declaring himself “a little piggy”.

A different CLSC person did come at 1:00 pm, and he got bathed, etc. and was asleep, finally, by 2:30 pm.  Andrea and I told her we could manage from there.  There was no point in her staying her full shift to watch him sleep.  He woke up around five, and we shared treats and a very nice visit, talking about the good times, and the work we had done together at IBM.  We were on some big projects together.  Every good manager finds a few subordinates they deem competent and can trust with any project.  Paul found that in me and took me with him, from the Education Center to the Air Canada proposal team, to the Canadian Pacific installation and support team.

A little after seven, Peter arrived to relieve me, and I was happy to meet him in the Grand Seminary parking lot to give him the ticket with four hours left on it.  The Parking Thieves have got quite enough money out of me.  I use every minute that I can of it.

Ginger and I had dinner at Ristorante Beatrice, which is her local, and it’s a good one.  It’s on Sherbrooke, at the foot of her street, and full to overflowing with movers and shakers.  This is an expense account place.  You could see the corporate diners all around, and dates to impress, rich tourists, etc.  The food was beautiful and tasty.  I had tuna tartare and veal cheeks, and we shared tiramisu and a meringue thing with a sparkler in it.  Both of our birthdays are coming right up, so I bought her dinner and she bought me dinner.  She also bought drinks for the nice couple from Michigan at the next table.  She wants the American visitors to get a good impression.