I got ahead of myself.  When I came upstairs to meet with the Symanskys, I brought my computer and my breakfast up with me.  When I am traveling, I often have a meal replacement shake, like Ensure, for breakfast.  It’s a good vehicle or swallowing all those supplements I take, because I don’t eat veggies.  It’s handy, and it holds me until dinner time, with just a tiny snack in the afternoon.  I set myself up on the kitchen table, Ensure beside computer, and I shook the thing.  It’s a shake, after all.  Only I didn’t notice the cap was off, and I shook it all over my clothes, papers, computer, etc.  Yes, computer.  I have killed a few laptops in my day, first with Coke, then with wine, and now, Ensure.  It’s the circle of life.  The good news is that Ensure is very viscous, and over a week later, the computer is running fine.  But, oh, the shame of it all.

I wiped down the computer, and everything else in sight, and changed my clothes, while Judy put the chocolate soaked ones in the wash and wiped the table and floor.  Then she put what was left of the Ensure into a glass, to protect me from myself  I finished my breakfast, and got busy on the cruise.

Cruise booked, I went back to Ternis’ for a couple of hours but I had to leave at 2:30 pm to get on the road to Ile Bizard, before the traffic made that a 2-hour project.  My Royal Banker had given me a good route, that became better, when I missed the turn off to Hwy 40, which would have led me west, then up St. John’s road, to the Société des Alcools du Quebec, and Ile Bizard.  There would be a lot of traffic on St. John’s, which usually has its own share of orange cones.  I was on the phone, you see.  I realized my error, when I passed the last exit on the Island of Montreal, and crossed the bridge to Laval.  Luckily, I used to live on Ile Bizard, and had clients in Laval, so I knew there was a ferry if I could just find it.  Google Maps doesn’t always work for me here, and it kept telling me it was offline, so I just followed my nose, and called Rod and Claude.  I had trouble following what they were telling me to do, but following my nose west worked just fine, and soon Boulevard Samson turned into Bord du Lac, and I knew I would find the ferry from there.

It’s a funky little ferry, and it only fits three cars, but it uses the current for power, so it’s nice and quiet and does the environment no harm.  I got right on and was at the Andersons’ house by 4:15 pm.  I was a terrible guest.  All I wanted to do was hop onto their Internet, catch up, and finish my travel work.  I worked until 7:00 pm, when Ginger and Scruffy got there for dinner.

Claude had really knocked herself out. The table was gorgeous. 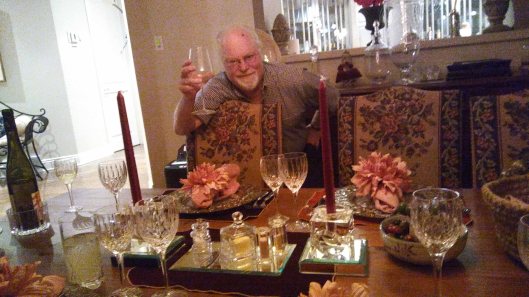 Her passed hors d’oeuvres were home-made savory pastries, filled with cheese and either olive, ham, or a huge blackberry.  For a sit down appetizer, she had made foie gras millefeuilles, with layers of spice cake and foie.  The main course was braised lamb shank, and she had made tarte tatin for dessert.  I was very impressed.  I was also very exhausted, to the point that I didn’t drink much, nor did I tell many stories.  I actually went to bed at ten-thirty and slept around the clock.

I woke up refreshed on Thursday, got a blog out, and did a full set of exercises.  I was in fine fettle for the next party.  It was at Chris and Marge Mapp’s house, just across the bridge in Pierrefonds.  I got Rod and Claude to muster a bit early, so I could make the SAQ stop I missed on Wednesday.  The party consisted of JoAnn Dery, Adam & Judy Symansky, Rod and Claude, and moi-même.  Four of us were AOPis, three from McGill and Marge, who met Chris, back in the day, at McGill’s French Summer school.  Adam and Chris were at McGill when I was there, too.  These are seriously old friends, I want you to know.

The Mapps had knocked themselves out, too.  We had duck rillettes and shrimp dip for starters.  The rillettes came on crackers and the shrimp dip with veggies.  Luckily they had extra crackers.  Then we had broiled bacon and basil wrapped shrimp on skewers, which was wonderful.   Our main was grilled filet mignon, baked potatoes with all the trimmings, and green beans.  Marge made her own apple pie for dessert, too.  I am very spoiled.  We rolled out of there pretty late, Rod and I propping each other up.  It was a good idea, until I fell into the ditch and he fell in after me.  Yes, Claude was driving.

I didn’t wake up in the pink of condition, but a couple of Advil, a long shower, and another full set of exercises helped a lot.  I stopped by the Patisserie de l’Ile Bizard, on the way out, where I had been told I could get pastries to rival the now defunct Gascogne.  I bought three custard millefeuilles, and an apricot tarte, which were very well received at Ternis.  Paul has been steadily improving on a diet of treats.  He can have dessert for every meal, now, for all that it matters.  He can’t get well, but he can get stronger and livelier, as he faces his planned end.  It’s kind of surreal, and stressful in a way I cannot describe.  I just feel the need for more sleep that usual, which is why these blogs are so late.

I stayed for most of the afternoon, entertaining Andrea, Jennifer, and Paul, each in a different way.  With Jennifer, we plan Paul’s celebration of life, with Andrea, we talk about our upcoming trip, and with Paul, I hold his hand and we talk about our adventures at IBM in the early days.

I took the Symanskys to Le Quartier Général, to repay their extraordinary hospitality.  Their basement apartment would be my base for three weeks by the time I leave.  The restaurant is on Gilford, in the East end, near where I went to grade school.  You bring your own wine and eat fabulous French food.  I had foie gras, for the third time, rabbit for my main course, and churros for dessert.  OK, so they’re Spanish.  We’re not actually in France, so the restaurant could get away with it.

Saturday, September 30, I worked away, on my computer and on my body, and spent the afternoon at Ternis.  Paul has limited visitors to people he has known forty years and more, as he has limited energy.  He is still with us, though, very alert when he isn’t asleep.  He needs a lot of that.  Andrea had gone to Magog to get a couple of days off from the stress, and to pick up pictures that would be needed for a slide show for Paul’s Celebration of Life.  She had seen the venue, atop Montreal’s mountain, and was well pleased with it.  I had left this weekend free for Terni projects, and wanted to try a new Thai restaurant in Westmount that the Symanskys love.  I proposed Thai take-out to Jennifer and it was the perfect idea.

Ordering was easy.  The menu was online.  Pick-up at “Pick Thai” was a nightmare.  Though it was not at all far from where I used to live, and though I haven’t forgotten how the city is laid out, I couldn’t find the place.  Between the orange cones and the double bike lanes right in front of it, I circled four times.  They were big circles, too, the same ones I had to make to get to the hospital, earlier in the week.  Eventually, I made it and got the food.  To my delight, Paul liked it, too, and had a healthy, for him, portion.  Jennifer and I were both exhausted, so we made it an early night.

Sunday, October 1, I met Roslyn and Real for Dim Sum at Kam Fung in Brossard, again.  It seems to be all I ever do with these guys, but it’s not broken, that idea.  I brought food, and their love, back to Ternis’ around one.  Then I went back to Westmount to exercise, and have a little walk around the old hood.  There was a snotty French woman in my favorite clothing store, so I saved a lot of money.  My optician wasn’t there, but I had a great experience in Lululemon.  I found two tops I liked, to replace those which I had forgotten to pack, and a charming sales person called around to get my size from two other stores.  I’ll have them to travel with.  Lulemon is a Canadian company, manufacturer of casual and exercise clothing, in innovative fabrics.  They started ten or fifteen years ago and are all over the continent now, if not the world.  Nice.

Judy and Adam were hosting Symansky family Sunday, and I enjoyed cocktail hour immensely, with this wonderful family.  All three of the Symansky daughters have charming significant others and there are three grandkids:  Alex, who is in the midst of choosing where she will go to high school, Malcolm, who is still in the very middle of grade school, and very charming, and Oliver, who’s still a kid, and the life of the party, noise-wise.  I would have stayed but Andrea was back from the country, and I joined her, Jennifer and Paul for duck confit, salad and yummy treats, of which there are never any shortage there.  It would have been an early night, but Adam and Judy were cleaning up when I got back, so it was more wine and more great companionship.