Yes, yes, we’re in Montreal – and catching up

I forgot to mention that we finally caught a Celebrity show, after dinner on August 10, as we sailed from Dublin.  It was an all-singing, all-dancing, with acrobatics and all, one, called “Life”.  We enjoyed it, even though it was so new, we didn’t recognize a single tune.

Thursday, August 11, found us in Liverpool.  The omelet was, indeed, the best breakfast.  Ours was cheese and onion, something simple to go with a lot of bacon, sausage, toast and jam.  Then we did the gym and I went to work on the phone and computer.  The day before a tour can sometimes be a lot of work.  I thought I had done most of it on the 9th, but it just kept coming.  I logged, I blogged, I sorted out all kinds of details.

I had decided to just pay for the 10-year-old third person in cabin.  His mother was sure she had been promised the tour and I didn’t want a bad taste in their mouths.  Luckily, I found out that kids were half-price, so it wouldn’t be so painful.  Having decided to do it for one, I put out a phone blast, last night, that anyone, with children wanting to come, should call me for very good news.  I could also use the blast to maybe drum up a bit more business.  Two more cabins signed up.

It was 6:15 by the time I got out and blowing stink.  I had planned to call Mary in Dublin, while I walked, but the wind was too high, and my Sim card had somehow disconnected itself.  I couldn’t fix that on the street.

When I got back I had a couple more phone calls to deal with.  One passenger was worried about being sick on the bus, as she had been a couple of days before.  I assured her it was just a city tour, and that she could have a handicapped seat in front.  We don’t have anyone badly handicapped.

We had another lovely dinner with Pat and Paul, and stayed up for yet another Beatles Tribute show.  We still like the music.

On Aug 12, the day of our tour, we docked in Belfast, Northern Ireland, at 10:00 am.  Around 9:00 am, I returned a phone call that had come in last night and sent out a short blast reminding people to be punctual at NOON, at our meeting place.  Since we had time, we had another omelet.  This time I replaced the toast with a waffle, for the best breakfast yet.  Then we did the gym and it was time to meet the group for our tour in Belfast

Paul came by the room about 11:30 to pick up his manifest and head out to meet the buses.  He texted me the info we needed.  I sent the lady who was handicapped by the possibility of bus sickness, out first.  Then I called the room to order and gave them instructions on how to get to Paul and the buses.  Pat and I compared our lists and we had accounted for every one of them.  We were down at the buses 10 minutes early, the best I have ever done.

Both buses did a city tour, Pat and Paul’s bus did the gaol first and then the pub.  My bus did it the other way around.  Our 72 people behaved beautifully, throughout, with no delays at all, at all, as the Irish would say.  We didn’t get much time to talk to them on the buses, though.  Irish guides have the gift of the gab and you can’t get a word in edgewise.  We all learned a lot and had a wonderful time, though.  Many. Many people told us it was the best tour on the cruise.  We hear this a lot.

The gaol guides won everyone’s hearts.  They must use acting students.  They put a lot of drama into it. 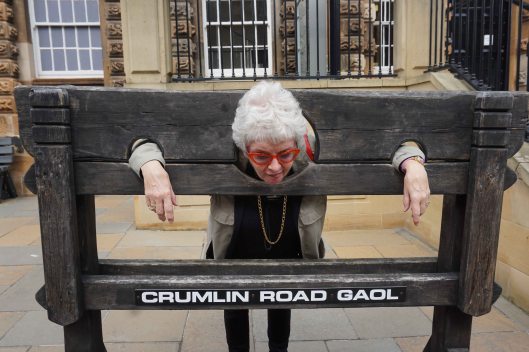 Then again, they’re Irish.  I can say this, ‘cause so am I, half, at least, Catholic from the North, no less.  No matter.  We learned that the tourism industry in Northern Ireland is very young.  It only started up around the year 2000.  Before the Good Friday agreement of 1996, no one wanted to come here.  Let’s face it, the place wasn’t safe.  “The Troubles” had left a terrible legacy of mental health issues, and a lot of doctors learned good plastic surgery.  No one wanted all that fighting.  The silent majority had to make itself heard.  Britain had decreed, 200 years ago, that no one who was Roman Catholic, or even Presbyterian, could have a decent education.  The Presbyterians were the Scots-Irish, who had been sent over to colonize Ireland and defend it from its enemies.  They fought with the Irish, against the British all through the troubles.

Now that equality has come, Belfast appears to be a lovely place.  The linen industry has moved to Asia and ship-building is a shadow of its former self.  The dry docks make good movie studios, though, tourism is catching on, and there are KFCs all over the place.  There’s also a lot of street art, both the un-commissioned murals of the troubles, and newly commissioned pieces, like the giant salmon, which is supposed to symbolize differing communities coming together in peace.  Canada should be proud that Bombardier is Belfast’s biggest employer.

On Aug 14, we were at sea, on the way to Scotland. We had a room service breakfast, and I talked to the guest who was looking for Edinburgh information.  I then went to the desk, where I was soon joined by Pat and Paul.  It was particularly quiet, and I ended up working there for an extra couple of hours, and a couple more after I had taken a gym break, with Elvon. I got a lot of PhotoShopping and blogging done, which felt good.

I was still there an hour later, when Lois Bacon came by all pumped up by an exercise class that had taken place on the dance floor on Deck 3, at the foot of the atrium.  She highly recommended the Lawn Club Grill, which we will do one night.

We had another nice dinner with Pat and Paul and the entertainment was a West End tenor named Andrew Derbyshire, who was tall and thin, so was his voice and performance.  Can’t win ‘em all.