On Saturday, August 6, we boarded and got to work in earnest.  Roxana, the Event Coordinator, met with me about 3:30 pm, and our lists matched.  I found out where our desk would be and we set the hours.  I adjusted my mail merge and the wonderful Roxana printed out the letters, with the Dates & Times document on the back.  Then I met with Pat and Paul, at our desk, and, in no time, we had added this last item to the packet and applied the labels.  We fanned out over the ship and everything was delivered by six o’clock.  I was on everyone’s voice mail by 6:30 pm, and we were in the dining room by 7:00 pm.  That’s as easy as it has ever been.  It’s wonderful having help.

The dinner special was roast beef.  It was delicious and we were ready for it.  We were also ready for bed, right after.

We were at sea on Sunday, August 7, and so we had office hours.  We got to the desk around 10:45 am.  I gave Pat a manifest and set her to collecting Passenger Ticket Contracts.  Then I gave Paul a camera, to capture pictures of whomever turned up.  We had a couple who had never heard of DV and the husband was pretty sure we were selling something, but she wanted to check.  We assured her there were no time shares on offer, and explained vacation.com and the DV the program to her.  She was thrilled.  Presently her husband appeared, they signed the Passenger Ticket Contract and she went off to Shore Excursions to cash in their Celebrity excursion for that day.

One very nice lady dropped off her waiver, but did not stop to chat.  Pat checked the list and saw there was a husband on the booking.  She questioned our lady at the cocktail party and found out he had died a couple of months ago.  They had planned a longer cruise, but she had cut it back to just this one.  We won’t talk about him anymore, as she really tears up, poor lady, but she is doing the right thing.

Next were a couple from Quebec, Roland and Ginette.  They were delighted that Pat and I spoke French, and we’ll never forget how she explained her name.  She’s “a little bottle of gin”. They are celebrating their 50th wedding anniversary, and Roland’s 80th birthday, this year.  They look at least 10 years younger.  What’s with these Quebeckers? I am sure glad to be one.

Another couple brought their waivers in, and the wife asked if the ship had dealcoholized wine for the party?  I promised to ask.  When I mentioned it to Roxanna, she had to wonder why anyone would want it, as it’s terrible.  I had to agree.  I drink it one month out of every year, when I go off alcohol to clean out my liver.  It is terrible.  She promised to ask for it, but no guarantees, there.

We stayed until after one, but no one else came, except a couple who were DV hosts themselves.  We had a nice chat about the job.

I went back to my state room to work.  First, I put the camera into the charger and put out a phone blast to remind everyone to bring their Passenger ticket contracts to the cocktail party, and to remind them to discuss any handicap they might have with me.  It’s a strenuous tour.  This serves as a subtle reminder to attend the cocktail party, and caused one guy to call in that they had lost their welcome packet.  I promised to bring extras to the cocktail party.  I updated the manifest, wrote the cocktail party speech, and had it printed, along with three extra welcome letters, three long versions of the tour description, three updated manifests, and one copy of the 2017 DV brochure, which I had downloaded from the Internet.

We got ourselves dressed up, as it was Formal night, which on Celebrity, is now Evening Chic.  Men can get away with a sports jacket, but there are always a few, like our quebecois, who want to wear their tuxes.  I had Paul and Elvon put on dark suits, to be sure we all looked dressy.  Paul had to go out and buy a suit.  He hadn’t worn one since he retired, and none of the old ones fit.  He looked very nice in it.  See: 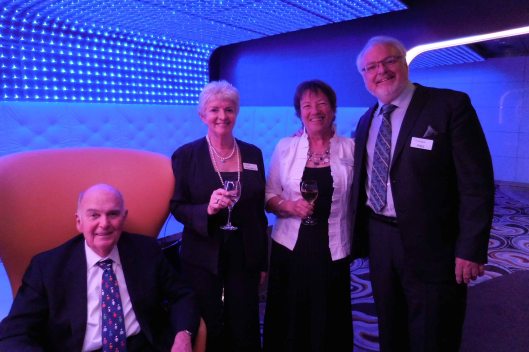 We were mobbed.  Pat managed to register 68 people, but we think she missed about ten.  Celebrity did a beautiful job on the drinks, which included some very colorful martinis, and the hors d’oeuvres, which were multicultural and delicious.

As usual, having people sing out their names, and where they are from, was fun and interesting.  We have groups from Texas and Oklahoma, this time.  There’s rivalry.

On Monday, August 8, we anchored at St. Peter Port, Guernsey.  I had high hopes for this port, as ex-Montreal friends, Daniele and Jean Schère, had a house here for years, so I had good information.  I also had a lot of work, and both Elvon and I needed some exercise.

We had Eggs Benedict in the Oceanview Café, the buffet on Deck 14.  They were disappointing, overcooked and served on a piece of toast.  If they aren’t on an English muffin, they aren’t Eggs Benedict.  We’ll need a new favorite.  We had chocolatines as a consolation prize, and made for the gym.  By the time we got out of there, it was after eleven, but we felt better about ourselves.

By the time I had caught up enough with my work to feel comfortable, it was 1:45 pm, and last tender was at 3:30 pm.  There was exactly one other person on the tender, one of the lecturers.  Lawrence had worked at NASA, which reminded me of Ken Stein, and had pretty much the same subject matter.  His specialty was space suits, and he had worked it through all the manned missions.  He had pretty much the same goals I had, some exercise and something interesting to see.

So, off we went, with a map and some guidance from a volunteer on the pier.  It was too late to walk all the way to our friends’ ex-house, but we actually came close.  We might have done it, if it weren’t still up a steep hill, and we were not at a level with Hauteville House, which Daniele had highly recommended.  Victor Hugo lived and worked there, in exile, from 1856 to 1870.  He had opposed Napoléon III’s coup d’état, you see.  Hugo once said “I missed my vocation: I was born to be an interior decorator.”  I am not sure any of the Interior Designers I know would have agreed with him, but one follows the mood of one’s times and tries to innovate.  It’s very dark and ornately carved, with magnificent workmanship, tapestries, and ceramics.  The ideas are exciting, and the views magnificent.  I wish I could say we saw all of that, but we got there too late to go on tour, so we just got to peep in to the hall, see the gift shop, and take a walk in the garden.  It has magnificent views, though: 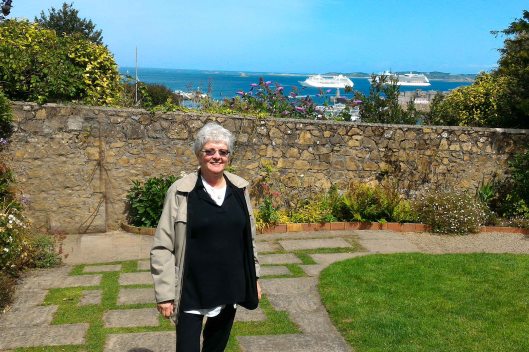 The line for the last tender must have had a hundred people in it, all neatly arranged in cattle gates.  Luckily, there was a pub, right there, and the enterprising publican had set up a beer station outside.  It was $US7.00, but it was good, local beer, and it sure helped pass the time in line.  I invited Lawrence to dinner, as I thought Pat and Paul would get a kick out of him.

I came back to a few phone calls about our upcoming excursion.  I called them all back and wrote to our tour operator, with passenger count (69) and handicapped count (4).

We had a long wait for dinner, with pagers, and the dining room was right next to the Martini Bar.  Lawrence insisted we should try the “Martini Flight” and we did.  It was quite a show, and, if you haven’t had it, I won’t spoil it for you.  Do it the next time you are on Celebrity.  I won’t tell tales on our dinner conversation, either.  We have to leave some things to talk about when we see you in person.  We might have had Tee many Martoonis.

The next day, August 9, started the same, with fried eggs instead of the Eggs Benedict.  They were better, but still somewhat overdone.  I made a note to try the omelets tomorrow.  They looked pretty good.  After our time in the gym, I got back to work.  There were a few phone calls to deal with, tour details for Belfast and advice for Scotland.  That reminded me to make two bookings for 4 in The Tower Restaurant, next to the Castle in Edinburgh.  The Witchery was already all booked up, and my emailing there, about accessibility, discouraged me from bring Elvon.

Finally, around 4 o’clock, I got out in Cobh, with no chance of getting to Cork.  So, I just walked around.  The part of town I walked was pretty sad.  Many of the stores were vacant.  I had seen that in Guernsey, too.  I hope it’s just re-development, but fear the worst.  The headline on the local newspaper was interesting, too.  It read “It’s time for Gay Priests”.  Haven’t we always had them?  I could have bought a 300g box of After Eights for 6.89 Euros, and passed.  I was pretty sure Mary could find me cheaper ones.

On Wednesday, August 10, we docked early in Dublin, Ireland.  I had been looking forward to this port, as Mary and Sean O’Beachain live here, and this is probably the first time, since high school, that more than ten years have passed, since we have seen each other.  The weather was nasty and the gangway was steep.  None of that dampened my spirits, but Elvon dug his heels in and refused to go, even though Mary’s car was 50 yards from the gangway, and two big guys and a wheelchair had been summoned to get him off.  You can’t reason with him, once he has decided he won’t do something.  So, I took him back to the cabin and went out without him.

It was so good to see Mary and Sean.  Sean made himself scarce while Mary and I knocked off almost everything on my shopping list.  There’s nothing like knowing a local.  Around 1:30 pm, we met Sean for lunch at Wynn’s Hotel, about the last place where you can get an old fashioned Irish lunch, in my case it was lamb chops and three kinds of potatoes.  Even they have gone modern, though.  They included a piece of turnip, two beans, and a few carrots.  I have a picture in case you don’t believe me about the three kinds of potatoes.

I have a picture of Mary and Sean, too.  They’re well and now have six grandchildren, all between the ages of 2 and 7, two in each of Dara’s, Mairin’s and Sean’s families.

We had a wonderful time catching up and reminiscing.  We have known each other for more than 50 years, and have shared more than enough binding experiences.  We are still there for each other, always.  On our post-prandial peramble, Mary was the recipient of a present from on high, and had the occasion to thank the lord that cows don’t fly. She can also thank me for having Kleenex and Wet Naps.

In 2017, we have two assignments on Holland America’s 647 passenger, ms Prinsendam, January 3, 2017, it’s a 67-Day Grand South America & Antarctica Voyage. There’s a 37-day segment, too.
and next summer, it’s the ms Prinsendam again, August 18, 20-day Iceland, Greenland & Scottish Explorer. We would love for you to come along. Just shoot me an email and I’ll get you a quote.