Jean called me again at 1:35 am, because the Northern lights were active, and I should go see.  Rolling over to the other side of the bed to get the phone had set off my sciatica, or whatever it is, and I had to jump around the room for a while, before I could dress to go up to the Crow’s Nest.  I threw my “Colombo coat” over my nightshirt, put on my furry slippers and went up there.  You had to go outside where there was no light, and it was cold.  I didn’t have enough on to last until the next flash, or I missed the last one.  I went back to bed. I’ll just enjoy Ruth’s pictures.

September 2 was a sea day and It was just a quiet work day.  After that and some gym time, I worked on my own paperwork and emails, which contained some fun ones from The Als, who are visiting England.  They are doing the kind of stuff I need a partner for, like meals at Gordon Ramsey and Alain Ducasse.  It was Gala night and the entertainment was the Post-Modern Jukebox, which I didn’t like the last go-around.  Dorothy and I parked ourselves in Stryker’s piano bar, instead and waited for the chocolate surprise at 9:45.  I swear this is a different Stryker from the one I remember from about five years ago.  Anyway, he was good enough and we had nice seats for all the chocolate nibbles and sips that came around.  Urp.

The next day, September 3, we were in Scotland, again.  Lerwick is a quiet little town on a Shetland Island, that inspired a lot of Westmount, from what I can tell.  I had a leisurely breakfast and gym time, before going out around one, in nice bright sunshine.  I walked around, bought a linen blouse for ten pounds and had tea in the Peerie Tea Shop.  The scone was home baked on the premises, and the special Hot Chocolate was something else again.  It was lovely, now.  I think this is my best Lerwick picture. 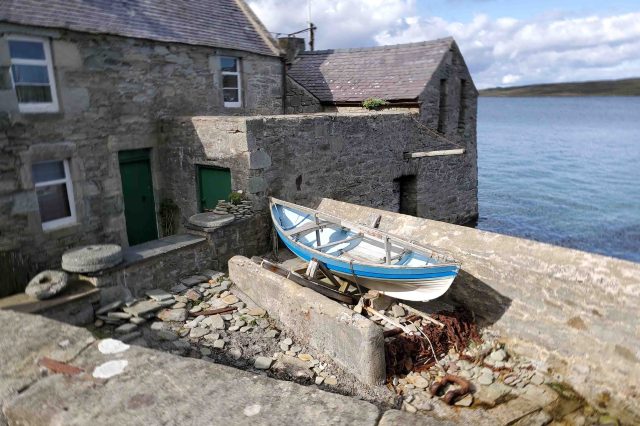 We had a group dinner in the Dining Room, again, and this time I was pouring wine from my wine package.  I had appetizer and main at one table and moved to another for dessert, in an attempt to have eaten with everyone.  It might have been a mistake.  It was a pretty rowdy table.  No one chastised us for it, mind you, and the group was having a wonderful time.  I was so pleased with all of them, that I offered to do boarding passes, a thing I had sworn I would never do again.  These guys deserve it, though.  So, I will.

The comedian was William Caulfield, an Irishman with a plaid suit on.  In spite of it he was pretty funny.

Next day, next port: Invergordon.  I had been in to Inverness before, so I thought I would just do Invergordon itself this time.  Once again, I did all my business and had my gym time, first, so I went out about one-thirty.  I wanted to do an hour’s walking around before I stopped for my tea this time, and it was a mistake.  When I got to the Café at a quarter to three, there were no more scones left and they were only doing take-out, as they were closing at three.  With a ship in town?  Really?  These people don’t understand business at all.  Maybe that’s why the houses are so cheap.  I always read Real Estate agents’ windows.  There’s nothing in St. Helena, for instance for under a mil and a half.  Here you can get an apartment for under a hundred thou, and a house for just a bit over. The wee house looks like this, mind you, but you’d own it outright.

Since I couldn’t have tea and scones, I stepped into the local hotel for a pint.  I sat at the bar with Mark and Irene from Belgium and we traded stories.  They tell me the next time I find myself docked in Bruges, that I must get myself to Ghent.  That seaside tram I saw the last time would probably do it and I should be able to get by with French.

I had met one of my DV couples in town, and they asked me for dinner, so I begged Dorothy in, and the four of us had a very nice one.  No one believes the age of Dorothy.  She’s so thoroughly modern and alive.  We went to the show.  It was Kaitlyn Carr, who sings and plays Celtic music on an assortment of flutes, tin whistles, etc.  She was good.

September 5, found us tendered off South Queensferry, port for Edinburgh, Scotland. We were lucky with the weather again and had another perfect day.  It was still cool, but the sun was out, and it was beautiful.  I had so much fun in Edinburgh three weeks ago, I decided to take the Lothian bus in again.  Of course, after my oinky eggs Benedict and strawberry crepe breakfast, gym time and email, it was noon by the time I got to the bus and almost one, when we got to town.  Without The Fringe being on, entertainment was harder to find, and time for it, harder still.  So I settled for tea and a mille-feuille at a French Café called Valerie, up the hill after you cross the North Bridge on the way to The High Street, The Royal Mile.  They did a beautiful tea for two, with the finger sandwiches, scones, and all, but I hadn’t had a mille-feuille in way too long.  My San Francisco source has been closed for renovations and my Montreal obeserie went out of business.  Sniff.

Then I walked the Royal Mile, all the way to the castle gates.  I got this lovely day in Edinburgh on my way down from there. 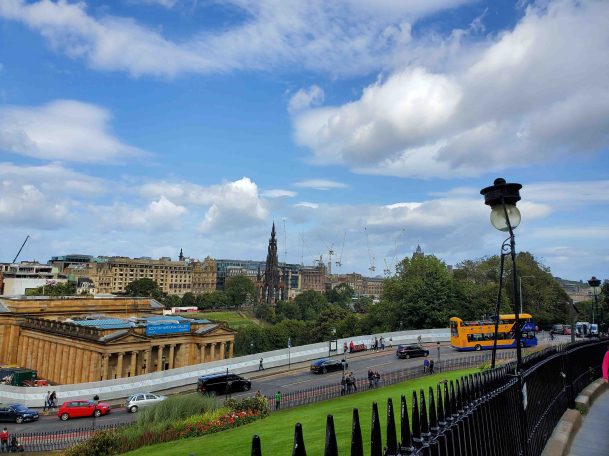 We were having dinner with our “first night” table again, but Brian and Sharon didn’t make it.  Sharon came up to tell us and to say goodbye.  Their tour had just got in and Brian is still struggling with a cold, so they weren’t dining room material that night.  So, Dorothy and I ate with Rolf and Marion and I found out that Queensferry itself is a charming hamlet and a good place to spend an afternoon, when you’re not overnighting.  Marion said it was the nicest little town on the whole cruise and I respect her opinion.  She’s an architect.

It was gala night and the show was the Postmodern Jukebox again, and I won’t waste an hour on that again.  I went up to the Crow’s Nest, instead, where Oliver, the bartender, was glad to see me.  He had a note from Lisa, the Bar Manager, whom I had copied on my last letter, circling the No-Host Farewell Cocktail on the next night.  The captains corner was free and she had reserved it for us.  I was delighted.

On our last day at sea, there was a lot of traffic at the desk.  Offering Boarding Passes will do that every time.  I had six couples in less than an hour, all with their data.  I checked it all at Delta/KLM, because often the confirmation you think you need with your airline, isn’t the one you think it is.  When I knew what time to go to which airline with which reference number for which couple, I went back to my room to pack and work on them, as they come up.  Luckily, I had asked them to be in their cabins when their times came up, because I did have to ask three couples to please bring me their passports.  KLM was requiring them, and some weren’t saved with the reservations.

I managed to slip in an hour in the gym, between planes, but it got very busy as it got close to cocktail hour.  I did make it up there with 8 minutes to spare and all boarding passes in hand.  This astounding group was there, in force.  Everyone came except my four Neptune Suite people.  I have to assume the suites have their own farewell party.  The rest of us had fun speculating about that.   We kidded around like the old friends we have become.  I had Dorothy join us around 6:30 and we had dinner with the last two couples there.  Again, it was a lot of fun and a lovely way to end a great cruise.

Too soon, it was time to disembark in Amsterdam.  I had a little extra time, because I woke up early and couldn’t get back to sleep.  So, I had breakfast served to me in the Dining Room, all very decadent.  I was on the ship’s transfer with three of my couples, and we were able to shoot pathetic looks at each other, as we navigated the zoo that was Schiphol.  We kept meeting in the cattle herding gates, as we wended our way back and forth and forth and back.  We never did decide we were having fun, but we asked each other a few times.  So here I am waiting to board my flight to Montreal and my log is up-to-date, another first.  I think it came from traveling alone.