This is the highlight.  This is Dublin, our DV shore excursion port and home to Mary and Sean, whom I will see right after.  I was up early, checking that everything was in order and grabbing a bit of breakfast.  I was at our meeting place about twenty minutes early and for once, no one had beat me.  They started arriving shortly thereafter, pretty much in reverse cabin number order, a phenomenon I have noted before.  It’s the people in the suites and balconies who have their acts best together.  It makes sense and it always amuses me.

We did have everyone pretty much on time and down we went to the gangway and our waiting bus and guide.  Rhona was lovely, organized, knew her stuff and loved her city.  She and Brian our driver were a dream team.  She confided later that it’s Sunday morning that’s the charm in Dublin, as the traffic is light until the pubs open at noon, and the football games get going in the afternoon.

On the way to Trinity College, Rhona pointed out The Customs House and it’s numerous architectural details.  It was built in 10 years, starting in 1781, mostly destroyed by the IRA during the war of Independence in 1921, and rebuilt.  There’s a replica of the tall ship, Jeannie Johnston, in the water near there.  The original was built in Quebec in 1847 as a cargo ship and ended up carrying famine victims back to Montreal, starting in 1848.  Her claim to fame was that most of her passengers made it to Canada alive.  There’s a new museum nearby called the EPIC, which tells the whole famine story.  Must see it one of these trips.

On to The Book of Kells.  I had seen it almost fifty years ago, when we first came to Ireland with Mary and Sean.  It’s much different now, and much better. Trinity College has used the tourist money well, for preservation and better exhibition.  It’s quite wonderful.  You don’t see many literary items from the 8th century that look this good.  If it’s more than three years since you last saw it, you’d enjoy going back.  The gift shop is good, too.  I bought an Aran toque for Rekjavik.  It’s really nice, but I later noticed it is only 30% wool and though the tags say “Ireland” in about five places, I never saw “made in” anywhere.  I’ll let you know how warm it is in Rekjavik.

We passed the Four Courts on the way to tea and scones.  It, too, had a fire during the war of Independence and you won’t find your Irish family’s records there.  The Hatch, Match and Dispatch sections all burned down.  You’ll have to find the relevant churches in the countryside, which can be pretty daunting if your grandparents didn’t keep good records of their own.  I was put in possession of whatever my family had about 25 years ago, and I ditched it all, when I made my last move.  There’s no one behind me to care.

Tea and scones at the Arlington Hotel were delicious and the room we were in was gorgeous.  Marty Frank made a new friend outside. 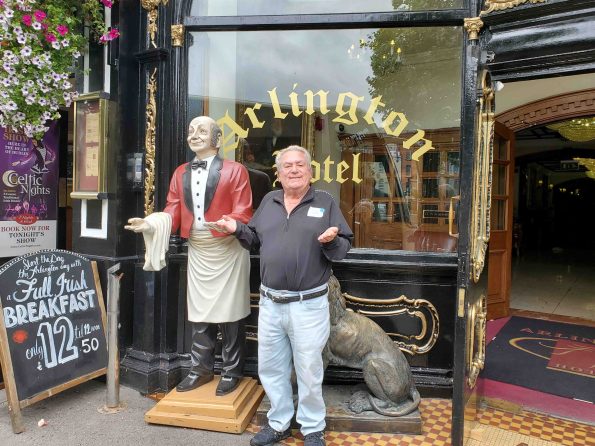 Back in the bus, we drove around some more, with Rhona adding interesting details, about the Guinness family, for instance, as we saw their mansion, and front yard, which is now the famous Steven’s Green, an oasis in the heart of the city. The Guinnesses gave both the house and green to the city, along with a lot of public housing.  They have an interesting concept here.  People pay for public housing according to their means and needs.  It’s called “differential”.  If you are doing well, you pay the fair rent.  If not, you pay what you can, and the state pays the difference.  I’m not sure I’d like to be administering the system, but somebody does.  We saw St. Patrick’s Cathedral, 1190, restored by Guinness, and Christ Church Cathedral, the protestant one.  It dates back to the 9th century and was restored by whisky money.  Who says drink is a bad thing?

All too soon it was over.  About half of the bus elected to stay in town and take taxis back.  I rode back with it but never boarded the ship.  Mary was picking me up and I had to get back to the port entrance.  Luckily, there was a shuttle for that, and I was there by the appointed hour.  Mary wasn’t so lucky.  There was a semi-final football game coming on in the afternoon, and a lot of the roads she wanted were closed to her.  Then the signage in the port was silly or non-existent, so she had to make a couple of doubtless expensive phone calls to my US phone, so I could get the security guards to guide her in.

We met the football deviation problems on the way out to her house, too, but, no bother, we had plenty to talk about.  We had a nice chat with Sean, around the kitchen table with some cheese and crackers to fortify us for the pub crawl to come.  We girls were going out alone.  Sean was watching the semi-final.  We took the bus, so Mary could drink without worrying about having to drive.  When Mary went to pay for me, she learned there was no need.  Her Senior pass allowed her a companion, free.  Some companion I am.  I am a year older than she is and have nowhere near the walking capacity.  Never mind, I rode for the 2 Euros that had already gone into the box, before the bus driver stopped her.  The ride cost was 3.20 euro.

We got off in Stoneybatter, a residential area not far from downtown, but one that no tourist would likely find.  Mary knows it because her eldest daughter lives there.  The pub was The Glimmer Man.  It was quite large, but made up of about ten small rooms, two or three of which were outdoors at the back.  The pub food came from a food truck parked out back, called Vietnom.  The menu was very eclectic, with dishes that borrowed from Indian, Mexican and Japanese, as well as Vietnamese, and were served on baguettes.  All this for 9 euros.  It was tempting but too early and we wanted more than a sandwich.  I am on my dry month, much to Mary’s disappointment, so I had a Heiniken 00.  At least I can look like I am drinking beer.  The décor in this place is amazing. 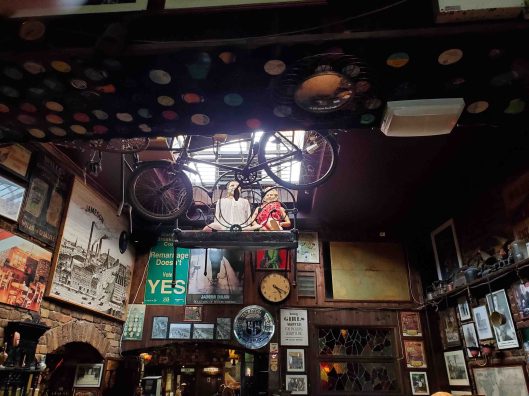 I wouldn’t like to have to clean it and I don’t suppose anybody does, beyond the floors, counters and tables.  This was one room.  Those are vinyl records on the ceiling, not to mention the bikes and occupied bed, hanging from it.  The walls are covered with various contributions from patrons over the years and there’s quite a substantial shrine to a female patron, who was the life of the party, until she got cancer and died young.

We finished our beers, one real and one fake, and moved on.  Our next pub was The Cobblestone, a music pub, like Carolyn and I were looking for last year and never found.  You have to be in a neighborhood, but now you know, and you can google it, next time you’re in Dublin.  It helps to have a target.  We got there around 5:00pm, and it was already too late to get a seat within earshot of the music, because it was acoustic.  Like the once a week music pub we found in Tipperary last year, people just dropped in with their instruments and played together.

We thought there were no seats at all, until a lovely young Swiss-German couple waved us over.  It was around the corner and at the back, so there was no music, but they were delightful.  She was here to live with a family for a month and learn English.  Her English was already pretty good, it just needed some improvement to follow classes for the advanced degree she was going for, after eight years in the work force back home.  Tamara and Enrique were fun to talk to and we learned things, like Swiss-German has no written language.  They write in German. Period.

We hopped onto the tram for one stop and ended up close enough to our chosen restaurant, “Chez Max”.  It’s a little French Restaurant and it’s wonderful.  We had soupe à l’oignon, moules frites, and mousse au chocolat. 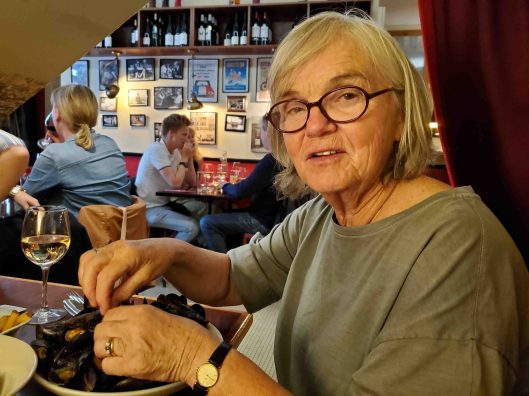 Well, Mary had crème brulée, but that was the only difference.  We had a little booth we could talk in and it was great.  The French fries reminded us both of Montreal.  Yum.  By this time, we had got through family and friend updates and were on to philosophical discussion.  Pity I wasn’t drinking.

Chez Max wasn’t all that far from Temple Bar, which Mary dismissed as the ultimate tourist area, but we walked through it anyway, just to have a look at the characters.  We saw a lot of them, and they were all so young.

By about 8 o’clock, my feet were giving me some pretty serious pain.  I have to deal with finding more comfortable shoes.  Mary helped me find a taxi.  We had a little hug and were both glad of having had this day together.  My taxi driver was very nice.  He didn’t know the port any better than Mary did, but eventually, we spied some people walking back to the ship, who knew where its gate was.  The security guard let the taxi through, when I showed my ship pass, and he delivered me right to the gangway.  He wouldn’t even break a fifty so I could give him a bigger tip.

I was never so happy to take my shoes off and rub Tiger Balm into my feet.  What a great day!