On March 29, our last full day in Shanghai, five out of six of us had decided on staying in the city to do all we could with Mira, instead of 5 to 6 hours on the bus. Scott assured us he would be fine going to Suzhou on a train.

We met Mira around nine and were soon off to the Jewish ghetto. Shanghai is very special to the Jewish people. The Japanese occupation, which lasted 26 years, ending with Hiroshima, was good for them, if no one else. Hitler offered the Japanese money to cooperate with his final solution by rounding up the Jews for extermination, and they didn’t take it. The Jewish community in Shanghai was still intact in 1945. Then came the civil war, which Mao won in 1949. Most of the Jews left between 1945 and 1949, bound for the USA and Israel, mostly. There are a few businessmen left, and some nice preserved buildings in the Ghetto. Michael Blumenthal and Peter Max lived here as young men.

Right in the heart of it is Hounshan Park, where there is Tai Chi and ballroom dancing in the morning. Trish and Roz joined in. We also found the Museum and Ohel Moshe synagogue very interesting. 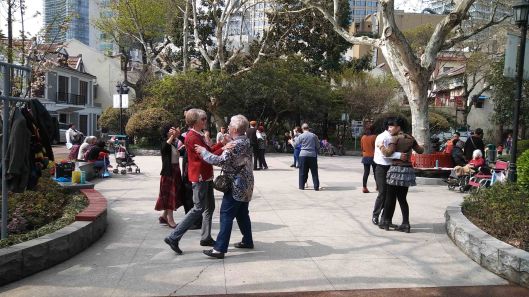 After that we visited the Jade Buddha Temple, and got an education on Buddhism from Mira, who is one. So, we now know about the hierarchy: Buddha, Bodhisattva, attvas, humans, animals, evil spirits. We saw the four guardians N, S, E and W, and it was interesting how the Northern guardian looked Caucasian, the Eastern, Oriental, etc. Hitler got the swastika here. He just turned the Buddhist symbol around. Not too creative, that.

Then we went to the Shanghai Museum for an hour. It’s excellent, too. We ended up in Tian Xi Fang, a local market, where there was street food and souvenirs. I could have spent more time there, but we were done.

We had dinner at Shanghai Grandmother, and it was great. It cost about $10 for five of us! The place was packed and you couldn’t reserve, but they found us a table and fed us royally, 70 Fuzhou Road, Huangpu District, near The Bund, walking distance from the Hyatt.

On March 30, boarding day, we had a free morning and I was planning on using it to blog, but I had to take care of our car arrangements. I had been charged for a car for 6 on the way in, which explains why the second car had never arrived. There were two problems with this. Scott, Roz and Donna might have fit in cozily, but they would have had to leave all their luggage at the airport, which I doubted they would have done. I managed to get the charge reduced to that of an ordinary car for the three of us, who actually used it. I had already asked for something larger to get us to the port and I reconfirmed and paid for that. It was a very long checkout.

The mini-van we got was fine, though. It got us to the port and we boarded the ship pretty seamlessly. It took me until after six to get my face-to-face with the Event Manager, but she was worth it when I got her. Gabriela Bevilaqua is wonderful. I love working with her. We sorted everything out, made the welcome broadcast, and got the letters printed by about 8:00pm. Trish and Steve helped me get them ready for distribution. Then we went to dinner and Trish ran them around the ship, while Steve and I had dessert. Good lass, herself.

The next day we were at sea and I was at the DV hospitality desk. It’s in a very busy area, with a Portuguese group and a Swedish group. There’s an Israeli group on the other side. Gabriela has her hands full. It was plenty busy, with guests coming in to meet me and hand in their waivers to take our tour. It’s very interesting. By the end of office hours, I had waivers from all but one of the staterooms on the highest floors. I think there’s a message there. I went to the gym and spent the rest of the day doing paperwork on the computer and getting ready for the cocktail party.

The cocktail party itself went very well, with 26 people attending, and most of them bringing in their waivers. I had time to get them all to introduce themselves and was rewarded when a few of them got up to join others with whom they had things in common. We had a late dinner in the dining room and fell into bed.

April 1, we docked in Incheon, port for Seoul, Korea. We had to do a face-to-face customs clearance before we could get out and meet our guide, but we were able to keep in WhatsApp contact while he collected some of the people and I waited outside customs. Rob is an outstanding guide. He was born in Korea but taken to the US as a child. He spent about 15 years there, before returning to North Korea in 2008. He was a bond trader for Merrill Lynch at the time. He only went as a tourist but got hired by the company that was guiding his group around, doubtless for his flawless English, curious mind, and outgoing personality. When it got too hot for comfort in the North, he moved to South Korea and started his tour business. He has a Korean wife and a couple of young kids, a boy and a girl. They are talking about moving to the States to educate them.

Like China, and Hong Kong, Korea was occupied by the Japanese for 36 years, ending with Hiroshima. Then the North and South Koreans had a civil war, ending in the early 50s, with an armistice. Nobody won, because the US stepped in on one side and China on the other. It’s sad, but South Korea is thriving, with companies like Samsung, Hyundai, LG, etc. bringing in big money. Koreans don’t buy Japanese cars. The Lexuses you see are American made. Speaking of cars, they are all black, white or grey, with very few exceptions. No one wants to express their individuality, if it might affect resale value.

Samsung is into everything here. You can go from birth to death, hardly dealing with anyone else. They have hospitals, food conglomerates, housing, cars, hotels, restaurants, clothing factories, undertakers and God knows what else.

South Korea is the second most homogenous country in the world, after North Korea.

We tried to go to the National Museum, which the Internet had told me was open, but it turned out that only the children’s museum was open, so we went to the Folk Museum instead and it was swell. We saw a lot of people there in traditional Korean costume. That started about five years ago and it will get you into the Palace Museum, where we are going next, for free. There are now rental shops near the major museums. I asked this one if I could take her picture and look at what I got. 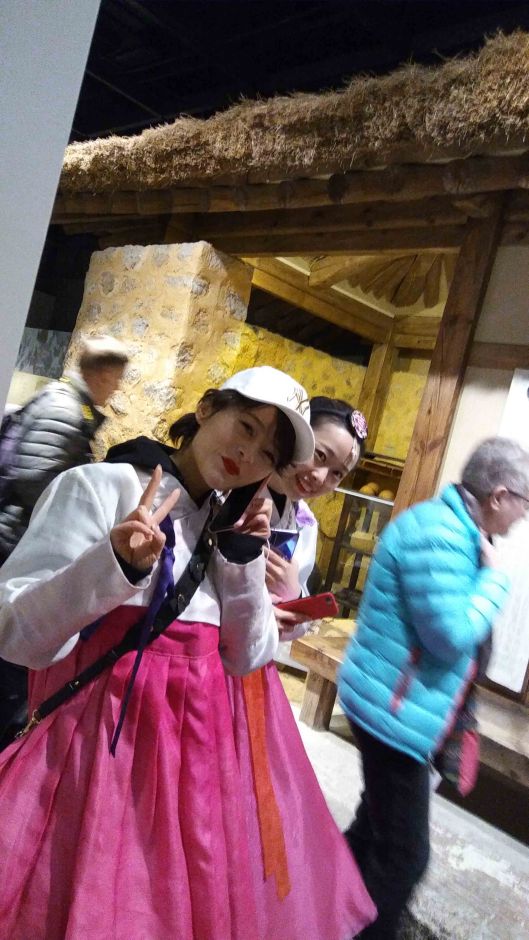 We learned about the Joseon dynasty, one of whose enlightened emperors simplified Chinese script so his people would not have to learn 26K characters. We had a terrific Korean lunch just off Insadon, where there was a bit of shopping, and on to the Gyeongbokgung Palace for the changing of the guard at 2:00 pm. There were a lot of traditional costumes there, on blonds and Muslims, as well as Chinese and Koreans. It was fun.

Then we went to the Kwang Jang Market, the kind of market I like, with street food and everything under the sun on sale, if you can find it. Rob thought we should try live octopus. It’s all about texture. It hangs on to your teeth. We were much happier with crullers, deep fried and served fresh out of the wok.

On the way back Rob talked about living in both the US and South Korea. He actually feels freer here. There’s no street crime. There are cameras everywhere, and all taxis and buses have black boxes, recording everything. The culture is all about saving face, so no one will disgrace his family by mugging someone, for example. Interesting theory. Think about it.

Before 1980, Koreans couldn’t leave the country, but now there is more outbound tourism than inbound. He got us back to the ship on time and we went to the show, which was the Sons of Soul, a Motown group. They were just fine, and so was dinner afterwards.

3 thoughts on “Shanghai to Tokyo – Part 2 – Shanghai and Seoul”