Dunnes has a Montreal-style chicken rotisserie, and since shopping was taking so long, and there was a new batch of chickens coming out at noon, Scott and I followed our noses.  By the time we had procured the wine glasses at the EuroStore, and the ramekins at Dunnes, it was time for the booze and chickens. The chickens smelled so good, we had to sneak them into the castle, for fear they might become lunch, and we’d be back to square one for dinner.

Scott made that rotisserie chicken look like a three-star restaurant meal.  He concocted a complementary risotto, and made a creamy gravy that had us all licking our lips.  We have had phenomenal weather the entire time we have been here.  The sun shines every day and the highs range from 72 F to 81 F.  There’s a cocktail hour on the stone patio, every night, and Scott makes us hors d’oeuvres for this, too.  A good few are cheese and charcuterie, but we have seen gravlax, sautéed shrimp, and just wait until you see what we got on Thursday.

The ramekins got used the first night.  Scott made individual lemon upside down cakes in them.  Yummy.  After dinner there are country walks, as the sun doesn’t go down until about eleven.  The Fogarty sisters and their husbands play cards in the cosy library, and the rest of us keep drinking where we please around the castle, until we fall into bed.

Our bedrooms are pretty, posh, too, complete with period furniture, for the most part.  Carolyn and I have the only twin room, with an ensuite bath, and it’s over the breakfast room, where we eat most of our dinners.  Unlike Terry Letson, who brought his wife, a teenage daughter and a friend of hers, Scott came alone, so we are the servers, and we aren’t schlepping everything to the formal dining room.  I think it’s about a quarter mile from the kitchen.  The breakfast room opens on to it.

This is where we departed significantly from the standard tourist offering.  We were off to Kill, where Mary and Sean have had a country house for 25 years.  It’s very near the coast, just a little west of Waterford.  We went out in a convoy around 10:00 am, and all three cars made it there on time without event.  This is more of a feat than it sounds, given what it’s like to drive in Ireland.  A lot of the roads are not two cars wide, let alone a car and a lorry.  Sometimes you just pull over quickly and cringe.  Add the manual transmissions, and the wrong side of the road, and you get the idea.  It’s better now than it used to be, mind you, thanks to Google maps on our phones.

We met up in the 2-pub town of Kill, adjusting with WhatsApp, until we were all at the same pub.  Then Mary came out and led us to the house, where the O’Beachains had laid on a spread of salad and smoked salmon, with excellent soda bread and Irish butter, cream cheese, and capers.  Carolyn had got her way, and Mary had made shortbread for dessert. It was all very good, and we got to see what an Irish vacation home is like.  Theirs is interesting as it is an old peasant house, significantly enlarged and modernized by its new owners.  Twenty-five years of ownership is quite new here.  After lunch, Mary led us to the sea, less than five minutes away.  She was disappointed that none of us had brought a swimsuit, nor showed any interest in bathing in the sea.  There were sure a lot of locals out doing it.  The weather was that phenomenal.  They did look like they were having fun, but the business of getting ten of us into bathing suits, in which none of us looks good, then getting out of them and showering to get the salt off for the ride home, might have taken more than a day.  It’s not like there were public facilities, we would have had to have gone back to the O’Beachains.

From the ocean, the Scalbergs and Hotards left us, to move on to Waterford, on which their hearts were set.  Mary couldn’t understand it, as she knew the crystal company had long since closed down, and all that remained was the tourist trap. It turns out local knowledge was wrong, this time.  The Japanese, who had bought it, had sold it back to Irish interests, and it’s back in local production.  I am not clear on this story, but Candy and Ernie saw crystal being made and came back with two enormous wine glasses to prove it.  I’m sure all their good wine will taste even better.

Mary led the Panetta car, and mine, off for a tour of the copper coast, which extends west from Kill.  We decided it would be fun for Mary and Carolyn to be together in her car, so we took off with them in front, the Pannetta car in the middle, and me bringing up the rear.  It worked well for a couple of stops, until it didn’t, and I found myself alone on the road to Cork.  We were all trying to call each other, but somehow, we never connected.  The Panettas and Fogarty-Downings gave up on us and pointed their car towards Lisheen castle and cocktail hour.  I had no such option, as Carolyn was in Mary’s car.

I figured I should just keep driving until I found the first town with a pub with WiFi, which is all of them, now.  That turned out to be Dungarven, about fifteen miles West, but at least two of my readers will be pleased with my choice of pub. 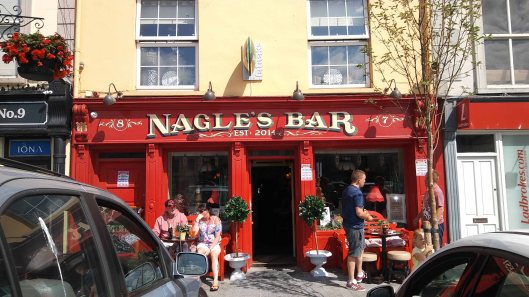 With the help of WiFi, my phone behaved better, and I was able to contact Mary, who arrived about a half hour later, with Carolyn.  I used the time to replace my map, which had gone AWOL at the castle that morning.  The new one won’t be leaving my car.

We beat the Panetta car home, because Lou hit a stone and got a flat.  That could have been a terrible experience except for the wonderful hospitality of the Irish.  Our people couldn’t get much sense out of their phones either, so they knocked on the door of the nearest farmhouse.  Mike and Tina took them in, and helped them to sort everything out and get the tire to the nearest garage to get fixed.  They also offered beer and nibbles, I think I was told.  Anyway, happy people arrived back at the castle, still in time for cocktail hour.  Gives a country a good name, that sort of thing.

Carolyn had gone straight from the car into the kitchen, as she had become Scott’s sous-chef.  She’s enjoying it and learning a lot that she can put to use when she manages the church suppers back home in Ohio. I, of course, needed some computer time.  I always need some computer time.  That’s how I stay in business, from all over the world.

Tonight we had roast leg of lamb mint jelly, fried potatoes and peas, baker’s pies and ice cream.  It was like the Sunday dinner we all grew up with, with more imaginative sauces.  Even the mint jelly was better.  It had come from Ballymaloe House; of which you’ll hear more later in the week.  The bakery pies were no roaring hell, though.  We won’t be buying those again.  The ice cream was the best part of dessert.

I had thought we might go to the Cliffs of Moher, on Tuesday, but no one was ready for another long day of driving on Irish roads.  Carolyn and Scott went shopping for seafood, and etc.  The Scalbergs and Hotards went to Kilkenny, in the afternoon, to buy wine.  I don’t know where the other car went, but mine went nowhere at all.  I was catching up on paperwork.  We had an ambitious plan for dinner.  Mary was coming to stay the night.  Everyone was so happy to have her, that we decided to eat in the formal dining room.  We hired a girl named Lisa to do the serving, so we could behave like the nobility that we are.

Mary got lost because she was too stubborn to use the simpleton’s directions I had given her.  They would have taken her a bit out of her way, but cut about three-quarters of an hour off the time she eventually made.  She probably circled Lisheen for a half hour, until a local lady took pity and led her in.  Oh, the shame of it all.  It sure made me feel better, though.

The formal dining room is pretty impressive.  The table would easily sit twenty.  Look at all the elbow room we eleven had.

Yes, our chef manages to find time to sit down with us.  Did anyone recognize him here?  He’s Scott Kendall, chef-owner of Carpe Diem in downtown Napa.  Check it out on Open Table and see that an impressive 94% would go back rating.  That’s Mary behind me, and Carolyn behind Scott.  Candy and Ernie are on the other side of the table.  The dining room’s vaulted ceiling is done with paintings of Irish legends, with Everard family members in the various roles.  It was the Lloyd family’s castellated home, built in the1850s, torched by the IRA in 1921, and restored by the Everards in the 1990s.  The Everards are an old Norman family, long resident in Ireland.  They had a real castle in Tipperary, Burncourt, which was built around 1641, but somebody else owns that, now, and it’s still a ruin.

The appies were Scott’s home-made graavlax, started when he arrived on Saturday, and just right now.  The starter course was fresh mussels, there was a beet salad somewhere in there, and the main was hake and salt cod.  We had buttered new potatoes, and a couple of vegetables, which I ignored, of course.    Dessert was chocolate pots de crème, which were cup-licking good.  So much for nobility.

After a little Bailey’s Irish Cream, we dispersed a bit, and after a couple of hours, I had to throw Candy, Carolyn and Scott out of the living room to get Mary to myself for a bit.  She was very popular, and so she should have been.  I don’t keep a friend for sixty years if she isn’t a winner.  We ended up in Mary’s room, still talking at 2:00 am, just like the old days.  There’s a sad note here, now.  Mary’s brother, Arthur, is dying of cancer in Vancouver, B.C.  We all loved Arthur.  That man had the most wicked sense of humour.  He was brilliant, and a good friend to many of us.  Life is short, we need to live it to the fullest.  We are the lucky ones.