Answering yours:  I’ll be back in Santa Rosa late night July 15. There are a few of us at Fountaingrove Lodge who will be glad to see you, Sue and Mike.  I now have accommodation, too.

We went to Bewley’s for breakfast, again.  It’s not cheap, but the quality is high and the place is beautiful, with its dark wood, tile and stained glass windows.  It’s our local.  One full Irish Breakfast was enough, though.  Now it’s yoghurt, granola, croissant, damn near the same price.  Once fueled, we walked to the National Gallery of Ireland, where they had a print exhibition and a show of circus art, as well as the usual old masters, which are never hard to take.  The weather remains beautiful, too beautiful, really. But after we had been walking around a museum for a couple of hours, it was time for a HopOnHopOff bus.

We rode it all around the city in the glorious sunshine, and got off around 4:30 pm.  We bought yoghurts and water and ginger ale and went back to the room, at The Fitzwilliam.  So began a saga of calling for ice, to keep our yoghurt from spoiling, and being offered free drinks.  This happened at all hours of the day and night, for our entire stay.  It’s the Irish solution to everything, it seems.

From five to seven, I worked on the blogs you already have and ran into a strange snag at WordPress.  I toggled to HTML from Visual view, and could not get visual view back.  The toggle just would not toggle.  So I embarked on a chat with them.  It took a good half hour, but the remote support person finally got the job done, no one knows exactly how, but, while he/she was interacting with me, he/she must have been reading my first excerpt, because this is the last I got from the WordPress end:

“I’m not sure either, as it was appearing on my end. Sometimes it’s just purely a matter of refreshing the page, mixed with some patience! It sure sounds like you have lot of fun adventures! If you need anything else, we’re happy to help!”

By the time Carolyn and I got out into the streets, it was hard to find a pub that was still serving food.  There was plenty of drink and music about the place, though.  There was a busker every half-block along Grafton Street, and every one of them was terrible, including the four-piece band outside of Bruxelles.  The side streets were full of pubs and the patrons has spilled out into the street, such that it was a continuous party over a good few blocks.

We must be getting old.  We went around it and found a more or less quiet pub, Davey Byrne, where we had smoked salmon and Irish stew, and it was fine.  Back in the room, we got more ice and a free Scotch – 19 yr old Glenfiddich, no less.

Carolyn needed to be off her feet today, as a bandaid she had on the sole of her left foot yesterday, had come off with a couple of layers of skin, and we didn’t want that getting any worse.  I needed to make up a bunch of itineraries, complete with Google maps, for out day trips from the castle, too.  So, we went to Bewley’s for breakfast, again, and came back to the room to take care of business, get more ice, etc.

We went to Bewley’s for dinner, too, and it was really good.  Don’t laugh, Mary, you introduced me to it 48 years ago.  And they are honest, too, the smoked salmon is “served as an open sandwich, with a side of mixed leaves.

God bless WhatsApp.  It is working a treat.  Candy and Ernie Scalberg were coming down from Belfast, with Kathy and Lou Panetta, in a van, and they were cutting it fine.  We had 11:30 am tickets to tour Kilmainem Jail.  There was traffic to worry about as it was Pride parade day, and it’s a big one in Dublin.

Carolyn and I were in the lobby early and had Martin, the concierge, order a taxi for us for eleven o’clock.  At five to, the Scalbergs arrived, checked their luggage, and off we went.  The jail tour was excellent, and they released us at the end of it.  Candy and I went right out again and joined the Pride parade.  We never managed to see all that much, but we did get a few ideas for next year, and a good facinator. 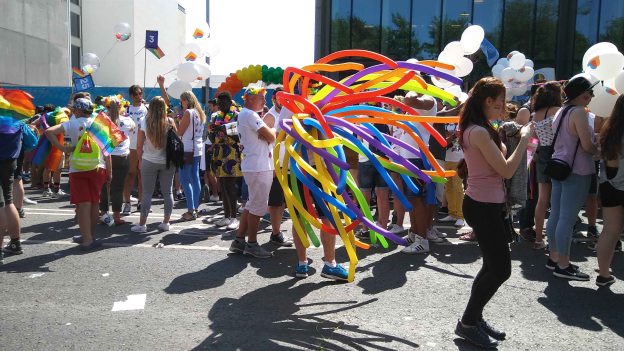 We walked to dinner to meet the Panettas, Kathy’s sister, Jean Fogarty, and her husband Bob Downing at Delahunt on Camden St.  Mary and Sean’s daughter Mairin, had recommended it highly.  That was no mistake.  It was excellent, and it was fun eating in what had been the office of a mid-nineteenth century grocery store.  It wasn’t as lively as the rest of the place, but it was a bit quieter for us to get to know each other, and for Kathy and Jean to catch up.  Delahunt doesn’t serve pub grub.  It’s very fine dining.  We walked back.  We needed to.

This was barge-boarding day, but God-forbid that should stop us from squeezing in a Whiskey tour.  We had breakfast at Bewley’s again, and walked down the street to the Irish Whiskey Museum, where Oine (Owen) regaled us with whiskey lore and plied us with drink.

Ruari (Rory) Gibbons, our Skipper, Driver, Cruise Director, picked us up a little before three and we were off to Athlone, to collect Hope and Sandy Hale from the train station.  Sure enough, they were there and we boarded our barge in Glasson without a hitch.  A little champagne, with our hostesses, Ethan and Ivana,a lot of unpacking, and we were ready for dinner.

What a dinner it was.  I am going to have to start taking pictures of the food, as Rory’s wife, Olivia, is a fabulous chef, and a real artist.  It’s wonderful.  We had a fabulous dinner, and spilled into bed.  Urp. I could have slept better, but that was no one’s fault but me own, for bein’ after drinkin’ too much.