March 29, was our first day back at sea, after Dubai.  I had a few things to do before desk hours and another Distinctive Voyages lunch in the dining room.  Tom, the Dining Room Manager, likes to do things for us, but these lunches are hard to manage.  The people tell me whom they want to sit with and then don’t show up on time, or at all.  I had not done them before this year and am not planning to do them again.  It was delicious, but the stress factor was off the charts, for what it delivered.

I emailed the yacht clubs of Greece and Monaco, to see what could be done there in the way of lunches, and I photoshopped a bunch of pictures.   The entertainment was a one-man show, Hamlet, cut to the bone.  The fellow couldn’t wear a microphone, because he kept switching costume suggestions at a great rate of knots.  He kept changing voices, too, and I don’t think anyone beyond the fifth row heard it all.  I knew the play, so I got enough, but the audience dribbled away, until there were only four of us at the end.  It was a shame.

On March 30, we docked in Muscat, Oman, in the same place as last year.  After breakfast and gym time with Elvon, I headed out.  On the shuttle ride in to the center of town, I saw the little outdoor restaurant, where I did my Internet stuff last year, but I also saw a Hop On Hop Off bus, and thought I would try that.  First, I did a little damage in the souk, more than I had planned, but the quality was good and the prices, right.  Note to self:  Don’t spend so much in Singapore, just because you aren’t going to India.  A lot of the same stuff is in this souk, almost as good quality, and a third the price.

I got off at the stop near the Intercontinental Hotel and walked there.  It’s beautiful.  In the middle of it’s lobby is a very elegant tent with a desk in it and a sign that it’s for Club Member check-in.  I went in and met Khamers AlMazrim, the Lobby Ambassador.  I fleshed my card and told my story, and he was delightful.  He fixed me up with an Internet password and guided me to rest rooms and restaurant.  There, I had a plate of hot mezze and signed on.  I was able to get some business done, but AOL could not be persuaded to send email.  I had to work on its site, which is not efficient when you have all your messages ready to go.  Oh well, the setting was lovely and the mezze were delicious, there were two of each of six different kinds.  I ate a whopping eleven of them.  I only needed one spinach tart.  The kibbeh, melted cheese pasties, etc. were all lovely, and actually delicious, with what I recognized as Thai dipping sauce.

I got back on the HOHO bus, with just enough time to ride it the rest of the way around, and still make the last shuttle to the ship.  The roads were good, and the buildings were very nice, mostly new.  Sailaway was wonderful, complete with belly dancer, but I couldn’t touch another Middle Eastern hors d’oeuvre.

Back at sea on March 31, Elvon went to the Queen’s Lounge to hear about pirate treasure and Shakespearean skulls.  I went to the desk.  Barbara Zion came to book her four into dinners at the Pinnacle and Canaletto.  Our Pinnacle dinner coincides with Jacob’s birthday and she thought he would like a party.  She will pay for the Abecassises and organize a cake.  Wendell Kasprick came to sign up for the Pinnacle, too.  He went to Wells Wescott’s birthday party, and thinks that back room I always use is a great place.  He’s right.  It’s just like home, if you live in a mansion. I made a bunch of birthday cards and a plan to go out Internet seeking with Michael Holt, tomorrow.  Then I got another Pinnacle dinner date from Tina, as the current one is over-subscribed.

On April Fool’s Day, we were in Salalah, Oman.  We  had breakfast in the Lido with the Yetkes, did our number in the gym and I met Michael around 10:30 am.  We could have had a taxi into town for $60, where there were a number of nice chain hotels for our Internet, but I told Michael about the Sailors’ Club I had used last year and that sounded good to him.  He liked the idea of the beach we would pass and the club sounded good, too, even with the concern that its Internet might get stressed, if a lot of people from the ship found it.

We set out to climb the hill, past the beach to the Oasis Club.  It wasn’t hard to talk ourselves in and the barman and staff could not have been friendlier.  They gave us the password and a couple of sodas, and we sat down.  Since we were almost alone in the place, it was great.  The problem with AOL sending/receiving was still there, but I was working around it as best I could, updating my applications, downloading confirmations for clients, etc.  After about three-quarters of an hour, I heard Michael, who was facing the Club entrance, say “oh-oh”.  It wasn’t good, a full bus load of people, who turned out to be part of the Korean Navy, was unloading, with their devices in hand.  It didn’t take long before the Internet speed really sucked.  I asked our friendly bartender how long they would be staying and was not remotely reassured, when I found out it would be a couple of days.  So, we folded up our computers and went to the beach.  There I took some pictures of my best tech buddy, one of them a handstand, but that was on his camera.  You’ll have to be satisfied with this. It’s a gorgeous little beach. 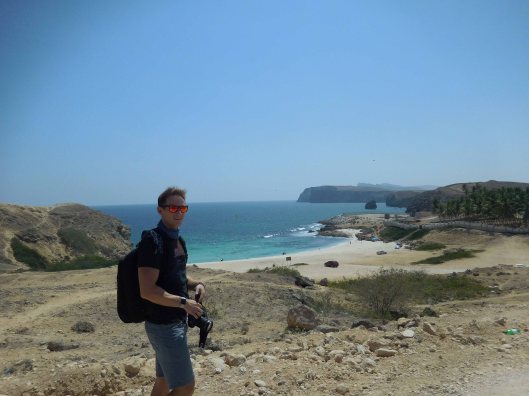 Back at sea on April 2, it was time to touch bases with Tina in the Pinnacle and Ron in Canaletto, and write another newsletter, as Israel and Greece would be fast upon us.  It was also Saturday, and it’s good to put a letter into their hands, to remind them of happy hour. Dee Westcott brought in some more amazing fish pictures.  She and Donna Kasprick, and Joanne Gardner, the Future Cruise Consultant, had had another dive adventure in Oman.  At a couple of points, there weren’t sure they would ever come back, but, did she ever get some good ones.  I intersperse them with people in my screen saver, which I will give to anyone that wants it, on the last day.  With any luck, Gene will give me USB drives for the purpose.  It makes a nice going away gift.

Happy Hour was lively.  Dee Westcott brought her iPad full of fish pictures, and the doc and her husband, who are always good company.  The Yetkes, Healings, Laurins, and Dan Samaniego were there, too.  We had Hotel Director, Henk Mensink, as a guest at our table for dinner, and the Westcotts had Gisela and Chas.   Henk is always fun, and he does such a good job.  The entertainment was Bernie Fields, a harmonica player from Montreal, who has played with symphony orchestras all over the world.

On April 3, the desk was busy, and we had a Pinnacle Dinner for 14, always fun.

April 4, was uneventful.  Tomorrow we will be in AlAqaba, the port for Petra and that was the day’s hot topic.  We had been there in 2010, so I was able to address that handily.  Sadly, I had to discourage some of the less able-bodied.  It truly is not for them.  Go while you can still walk a couple of miles.  We had Culinary Operations Manager, Paul Kerr, and his wife, Sharon, for dinner, with the Laurins, and Dan Samaniego.  It was a good night.