My next assignment is Celebrity Silhouette, August 6, 14-Night British Isles Cruise, Amsterdam to Amsterdam.  Do not post on the blog to sign up.  Email me directly.  Better yet, call Becky Jones and book it, telling her you are my client –  210-745-0124.  See the itinerary and approximate pricing at http://www.cruisepro.biz/search/enter.asp?site=X1952&dir=OfferCompare&MyOffers=3975684&B2CQuickView=1&account=Helen+Megan,+HelenMegan@aol.com

On February 23, in Benoa (Denpasar), Bali, Indonesia, we had one of Made’s wonderful taxis.  Our plan was similar to the Westcotts and Healings, only we were to start an hour and a half later, and do less touring before lunch.  Dee had booked Made and we had Wayan.  Made, being the boss, had got there much earlier than Wayan, with the result that his car was so boxed in, by the rest of the taxis, that it would have taken at least a half-hour to get it out.  He sent the Westcotts and Healings off with Wayan and waited for us.  Our plan was to go pretty much straight to the restaurant at the volcano.  We only stopped in one place, to photograph the UNESCO rice terrace project.  I don’t know how much it has really done for rice-growing in the country, but it’s very picturesque and a whole bunch of shops have sprung up near the viewing platform.  I scored $7 pantaloons, all in the same pattern, but six different colorways.

We had some rain on the way up the mountain, and a storm seemed to be threatening, but it cleared as we got near the top.  By this time Made had contacted Wayan and established that we were now the lead car, and would save places in the restaurant.  On the way in, we were approached by a couple of vendors.  One of them had a particularly nice carving of a fisherman for sale.  I examined it closely and liked the quality of the work, and the grain of the wood, with its carefully applied coat of varnish.  He wanted $100 US.  He had come down to $50 by the time we entered the restaurant, without buying it, but it was obvious we had some interest.  Why, I do not know, as we already have an Asian sculpture museum at home.

We scored a couple of tables on the terrace overlooking the volcano, and I got some interesting pictures before the storm hit. 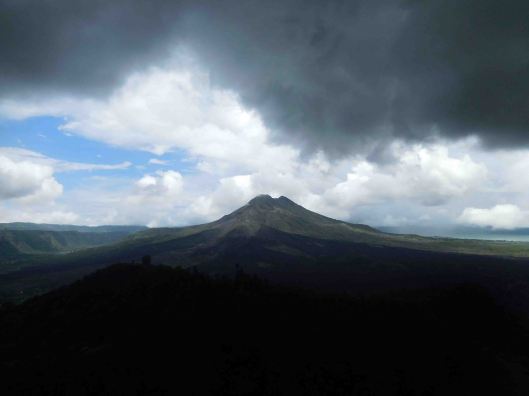 The other car arrived in the pouring rain.  The terrace was sheltered enough for us to stay there for lunch, and it was interesting, with the thunderstorm going on.  It cleared enough for Dee to get a couple of pictures, and the food was delicious.  Made and Wayan ate with us and we learned more about the way they live.  Those spotless SUVs they drive, don’t come out unless they are making money.  They get around on motor scooters, with their wives and a couple of kids, just like everybody else.  Made has a family farm, too.  So does Eka, our dining room steward.

By the time we were leaving the restaurant, it was pouring again, and there were a lot more vendors at the door, selling not just carvings, but pencils, postcards, and miscellaneous chotzkies, too.  It was slippery underfoot and getting Elvon to the car, no matter how close Made brought it, was a challenge.  In the middle of all this, my fisherman carving vendor came down to $25 and I bought.  He wrapped it up nicely in paper and plastic to keep the rain off and gave it to me as I got into the car.  The road drops off on both sides, we were riding the caldera of a hopefully extinct volcano.

We stopped by the batik factory on the way back, got Elvon a great green shirt, and just made the ship.  It was an A+ day, until I unwrapped the phisherman.  It wasn’t the same one, by a long patch.  The carving was much rougher and the varnish had become a coat of dark brown paint.  There’s no way I’ll be paying the freight to get the thing moved across the country, when we dock in Fort Lauderdale.  . So my $25 purchase, instead of being a great bargain, was a total loss. We’ll go to a proper carving store next time. I should have known better.

Oranges from Eka’s farm were special at our table and the entertainment was excellent, Vincenzo, a Latin and Spanish guitarist.

The next day, the people, who had Made’s third car. came by the desk to tell me how much they loved their driver, Gede, and their tour yesterday.  Made has a good thing going there.  Too bad the Amsterdam comes only once a year, but word will spread.  I am spreading it here.  madeseneng_a@yahoo.com  If I had decent Internet, I’d put him up on Trip Advisor.  When I do, I will.

I did a lot of concierge work and made a few birthday cards, now that my computer is behaving so well.  I am catching up.  It’s a good thing, because Hong Kong and Singapore will set me straight back.  They are supposed to.  That’s what world travel is all about.

The entertainment was Pete Cutler, a song and dance man, and we liked him.

On February 25, we docked in Semarang, Java, Indonesia.  After time in the gym with Elvon, I set out for the mall.  It’s a familiar one and has one good store for batik.  I bought Elvon a nice brown shirt, but nothing for myself.  There wasn’t any decent Internet, so I shuttled back to the terminal, where there was.  I sat next to Romeo, our wine steward, for the Indonesian version of a rock concert.  All we wanted was the free Internet, which was pretty good.  Just before all aboard, I bought Elvon another shirt for a small fraction of the first one.  It’s not real batik, but it looks pretty good for under ten bucks.

I hopped back on board and mustered Elvon for sailaway, one of his favorite activities.  We joined a couple of our people and more joined us.  It was good fun, if a tad too early, at 3:30pm.  We had a nap before dinner.  The entertainment was “Opera Interludes” and they were very good.

February 26, found us docked in Tanjung Priok, Jakarta, Indonesia.  I will never bother to shuttle in to Jakarta.  The traffic is some of the most miserable on earth.  I did spend a little time in the pier market and more Internet catching up.  I had business to do, too.  I am booking a group of 24 for Alaska in 2017.  It’s fun on board in these ports, as many crew family members visit the ship.  Flautist Clare Langan was good, too.

We crossed the Equator, again, on February 27, but didn’t bother to kiss the fish.  No need for that much of a good thing.  I went to my desk.  People are getting serious about Hong Kong, now, and plans are shaping up, both for those who will be coming ashore with me and those just wanting advice.  HKTB did deliver the brochures in Semarang and I recorded that fact in today’s newsletter, so my people could come and get them.

I finalized all the restaurant and friend bookings that I could.  It’s an iterative process.  One couple wants to visit the GeoPark and I don’t know much about it, so I added that to an email to HK friends who will be joining us.  Someone will come up with a good suggestion for them.

I printed and delivered my letters and spent quite a bit of time with the Future Cruise Consultants.  It was Saturday, so we went to happy hour, dinner and Pingxin Xu, the Hammer Dulcimer Master.  He’s very good, but you sure see a lot of him at sea.

At the desk, at sea, on February 28, I booked the last haircut at the Mandarin.  Her boyfriend wanted to tag along.  This was the second such request, so, I gave up.  The girls’ outing won’t have the same flavor, but we’ll still get our hair cut and lunch at the Clipper Lounge, which is always fun.  I dispensed more HK information as I worked on logistics for RHKYC.  Logistics for me, usually means something, in writing, that people can follow.  I started working on the letters, which I would publish and deliver on March 1. We had a dinner in the Pinnacle, which was a lot of fun.  We missed the show, though, as there was only one and it came in the middle of dinner.

Still at sea on February 29, Dee Westcott showed up at the desk with a USB stick full of the most glorious pictures taken scuba diving on the Great Barrier Reef.  What a fabulous addition to my screen saver.  She also wanted to recommend, and have me record, Peter Yealands’ winery near Picton, NZ.  It leaves no carbon footprint at all.  Put it on the list for next time we stop in Picton.  Other than that, the day was pretty uneventful and I was able to finalize almost everything for Hong Kong and sell some travel, too.  We had a production show that night “Rock at the Opera”.  It was great.