Sunday, December 1st I spent some time with my computer, still not enough to blog, but I did take time to exercise.  I left the house around 4:30 because I was planning to walk to Park Avenue to meet Linda, Bev, and Wendy at Blumenthal’s, close to the movie we were going to see, part of the LGBTQ film festival.  It wasn’t much colder than it had been, but it was a lot damper and that makes a big difference.  I lasted about eight blocks along Sherbrooke, before I broke down and took a bus, to get out of the cold.  I got there first and had a nice glass of Montepulciano d’Abbruzzo, to warm me up while I waited.  Dinner was good.  They had foie gras, so I had it, and boeuf bourguignonne, too.  The movie was excellent, Vita and Virginia, and yes, Wolfe.  Now I am reading Orlando, because it’s about Vita Sackville-West and I know some of the story.  I am almost half-way through, and Orlando is still male. We came back on the Metro.

Monday, December 2, I signed up online for my McGill Lifelong Learning courses and ordered my party furniture from Bench and Table – 5 banquet tables, 40 chairs, two garbage cans, and two coat racks with hangars and boot bags.  The pavement was dry, but just in case. At one thirty, Joan McGuigan, my Real Estate Agent, picked me up to take me to the notary’s office to close on the condo.  This I did and picked up the keys.  It felt good.  It’s been feeling good the whole time.  The weather may be terrible in Montreal, but everything else is just wonderful.

When I got back to Ginger’s she was home and what did we do?  We went out to dinner.  We picked her local Thai restaurant, which, sadly had been going downhill these last few years.  It had been so great.  But it was good enough and again, within walking distance.  We took cabs, though, because the weather was pretty foul.

Tuesday was full of party related activities, getting all the purchases in and setting up the rented furniture.

The chicken came at 6:30pm and the people followed at seven.  In the end there were 30 people eating warm dead bird, drinking boxed wine and having a wonderful time.  I know I sure did. The snow held off and there were no boots to deal with at all. 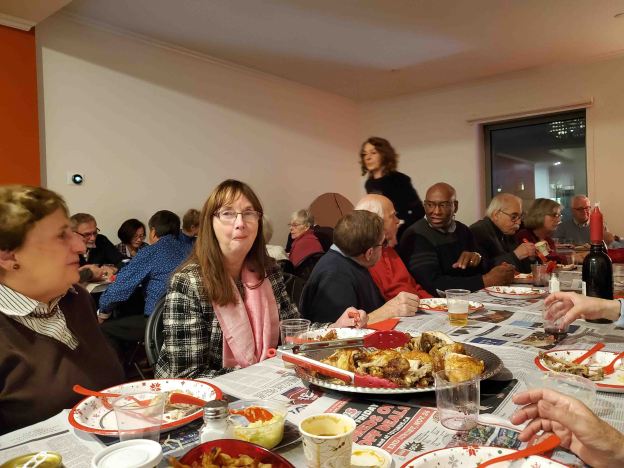 Still no news as to when my furniture, etc. will arrive.  But now I am ready for it.

Wednesday morning, I walked back to the condo, broke down all the chairs, threw out the garbage, and cleaned it up as best I could. Then I walked back to Ginger’s, did my exercises and read my email.  I found out my car had arrived at the car pound and I had 72 hours to get it out of there before it started costing $40/day.  The train is moving.  Ginger and I walked back to Peel St and had dinner at Alexandre, of which I had fond memories of lunches and happy hours, when I was working downtown.  It was good.  I had liver and onions, yummm.  It was, however, pretty empty, as all the other downtown restaurants had been.  Montreal’s new mayor’s focus on bicycles and all the new, as yet unoccupied, condos, have made it very hard to park downtown, with the result that people are eating out in the neighborhoods, where there are a lot of new little restos, many of which let you bring your own wine.  It’s a concern.  We passed the Ritz on the way home and stopped in for a drink at the newly restored bar.  It was very nice but should also have been fuller.  Oh, but the Madeleines, OMG, we ate two orders.

Thursday, I finally met with Andree Sauter, my Interior Designer, at 1207 (the condo).  Here began some very intense days.  We went over the place with a fine-toothed comb and found a lot of stuff that looked a lot worse than it did when I looked at the place in August.  It’s going to be a big ka-ching, but every penny will come back, because it’s one of the best in the building and will surely be the best two-bedroom, when we are done.  We see eye to eye on a lot, but Andree likes her colors a lot lighter than I do and has no truck with red walls at all at all.

Around 3:00 pm, we quit because I had to go deal with the car at the pound and it was sort of on her way home to the West Island.  She drove me to Saint-Laurent, where I picked up the paperwork, and over to customs in Dorval, where it took about a half-hour to clear.  An agent will inspect the car tomorrow, and I should be able to pick it up in the afternoon.  I took a taxi back to Ginger’s.  The weather was awful, all snow and sleet and wind.  Ginger and I were supposed to be having dinner with Maqbool Spencer, but we called it off because she’s in a walker and it was dangerous out there.  We stayed in and had warm dead bird leftover from the party.  Perfect.

The next morning, I woke up knowing I was going to have to insist on my red office.  I had lost a lot of sleep over losing it.  In the end, resale is not as important as being happy in the house you just bought and plan to live in for a while.  I picked up my email and found out Justine Sentenne was ready to have dinner with us and so we decided to be a foursome, with Maqbool, as the weather had improved some.  Ginger and I went to meet Andree at Union Electric to look at light fixtures and taps in the same building.  We got a bunch of LEDs for the ceiling lights, and checked out ceiling fixtures, should my existing ones not work.  Then we looked at very high-end taps, so high-end that it was going to be over six thousand dollars just for the master bedroom bathroom.  I gulped.  Then Andree drove me back to the car pound to pick up Babar, as it was getting on in the afternoon.  He was waiting patiently, covered in two or three inches of snow.  I don’t own a scraper, so I tipped Hugo, who works at the pound, and he scraped him off for me.  Bless his metal heart, Babar started on the first turn of the key, as if he had been in Montreal all his life.  His windows were frozen shut for a few minutes, but that’s par for the course.  I drove him home through the slush and bought him a hand car wash from the guy in our garage who does such things.  Nice place to live.

Ginger and I picked up Maqbool and Justine and their walkers and went out to eat in a neighborhood.  We picked Baton Rouge, which was packed and noisy, and we wished we had eaten downtown in one of the nice, empty, quiet places.  Oh, well.

Saturday, Andree and I met with our general contractor and painter for a good few hours and got a lot done.  It was pretty intense, though, particularly when I rejected the red she came in with as dusty rose and got out one of the Dollar Store red napkins to show her what I wanted.  I can hear Deborah Robertson laughing from here.  Never mind, we’re getting through it and it’s going to be fabulous.  Best of all, I am going to be happy.  I am happy already.  I got back to Ginger’s around five-thirty, did a little work and exercise, and we went to eat at the bar at The Ritz.  That place could easily become our local.  Not a cheap local, but very, very nice. When we got home, I got a phone call from Kevin, the Allied Van Lines driver who had picked up my worldly goods in Santa Rosa.  He would be in town soon.  I would meet him on Tuesday morning at 7:30 am, at the same pound where I picked Babar up, get the paperwork and clear customs.  He would deliver the goods on Thursday, December 12.  I sputtered that I would then be on my way to Kuala Lumpur, but that was how it had to be.  Wait until you see the plan we came up with.  I have the most amazing friends.

Sunday, December 8, we went to the first ever Children’s Christmas party at the Mount Royal Club.  Ginger decorates the club at Christmas, along with the A & P, and Victoria Hall.  It’s her Christmas gift to these nice places.  Anyway, the party was fabulous and lifted The Mount Royal Club, that staid bastion of Montreal’s English establishment, to a new place.

The Club President donned a Santa Suit and took letters from the children, there was face-painting and a balloon man, and everyone brought a present to go to the Toy Tea a few days from now.  The children learned the art of tipping, note the balloon man’s hand.  It’s a life-skill they’ll need one day. 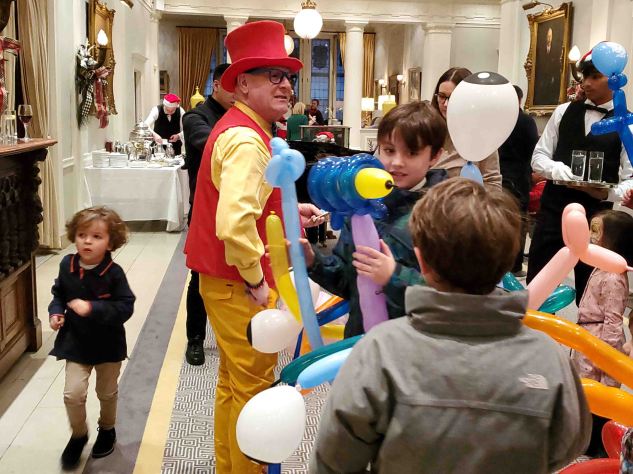 I especially loved the carol singing, which alternated between English and French carols.  There really is no longer an English establishment, and that’s how it should be.  It has all happened in my lifetime. Note the little boys playing the piano, along with the pianist. She reacted by drowning them out.  It was good fun.

Next thing you know, the club will have a woman president.  Ginger would be a good candidate.

We walked over to The Vogue Hotel bar for a top-up dinner, after the lobster rolls, cheese, etc. at the club.  That was a great place, too.  So many great places to walk to.

Monday, December 9, I was back shopping with Andree.  This time we went looking for window shades, which was easy, after the taps.  Then we went to Home Depot, where we got track lighting, a medicine cabinet, a nice bright ceiling fixture for the kitchen, felt and clear pads, a new tap for the powder room, and we looked at floors.  I was still fussing about taps and didn’t like much of what Home Depot had, except for the little powder room tap that we did buy.  Andree vowed to get the price of the ridiculously expensive ones down.  Helen and Ginger ordered in warm dead bird again.  It was wonderful, and easy to digest.  I had to get up at five-thirty and I still had to pack.

Today is Tuesday and I did get up at five-thirty.  My taxi driver was waiting at six-thirty and we loaded my very heavy luggage into his trunk.  We went to the pound and met Kevin and my truck.  I got the paperwork and the taxi took me to customs, twenty minutes away.  I cleared customs in record time.  The nice customs man didn’t even ask for my passport, as he had seen me bring it, well, them, out to clear Babar, last week.  Then we went back to the pound and they released the truck to Kevin.  It’s complicated, but he will be unloading on Thursday, so in lieu of me being there:

I will be at the end of my cell phone until 1:30PM Montreal time, after which time I will be in the air for many, many hours.  I am flying to Kuala Lumpur.    Huge thanks to Ginger, Andree and Bev.  I have the most amazing friends in the universe.  I can’t wait to get back and see what the place looks like.